Venus Williams excited to be back in action in Toronto

Williams suffered her earliest French Open exit in 12 years in May, when she crashed to a first-round defeat to Poland's Urszula Radwanska. 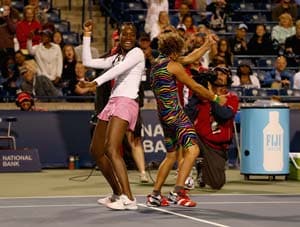 Seven-time Grand Slam champion Venus Williams, set to launch her Toronto WTA campaign on Tuesday, believes the back trouble that forced her out of Wimbledon is behind her.

Williams suffered her earliest French Open exit in 12 years in May, when she crashed to a first-round defeat to Poland's Urszula Radwanska.

She then pulled out of Wimbledon, but said Monday she thinks she's fit enough to mount a challenge on the hardcourts at Montreal, with an eye to the last Grand Slam of the year at the US Open later this month. (Also read: Injured Victoria Azarenka pulls out of Toronto event)

"I just started to realize that I couldn't play, especially since I didn't have a serve," she said of her decision to take a lengthy break. "It was just really hard to play without a serve, I found out -- especially such a huge part of my game."

"I feel like I'm at the point now where I can hit the ball pretty well," she added.

Williams was scheduled to face Belgian Kirsten Flipkens in the first round on Tuesday.

She warmed up for that with a doubles exhibition on Monday night with sister Serena, the world number one and top seed, along with retired WTA great Monica Seles and young Canadian Eugenie Bouchard.

Mattek-Sands gained a place in the draw after Britain's Laura Robson withdrew Monday morning with a right wrist injury. Robson was the latest injury casualty in the event, which had already seen world number two Victoria Azarenka and number three Maria Sharapova opt out.

The Italian next faces either 16th-seeded Serb Ana Ivanovic and Hsieh Su-Wei of Taiwan.

Stephens fought back from 5-3 down in the second set and after failing to capitalize on a match point at 6-5 closed it out in the tiebreaker.

"It was definitely tough. She upped her game a lot in the second set," Stephens said. "Sometimes it's going to be a little up and down, but I thought I stayed pretty solid and managed to get through it."

Tenth-seeded Roberta Vinci reached the second round, but she had to fight for a 2-6, 6-4, 6-3 victory over Germany's Julia Goerges.

Vinci stormed back from 3-0 down in the third set to advance.

"She's a great player and she played a good first set," Vinci said. "I was 3-0 down in the third set. It was difficult. There was a lot of wind, especially on one side."

"In the third I tried to play aggressive and also put a lot of balls in the court because sometimes she plays an unbelievable game, then sometimes not so good - she has a lot of ups and downs," she added. "The important thing is I won, though."

Slovakian Dominika Cibulkova, the only other top 20 player in action Monday and winner of the title in Stanford a fortnight ago, took on compatriot Jana Cepelovaand and beat the qualifier 7-5, 6-4.

Comments
Topics mentioned in this article
Tennis Victoria Azarenka Venus Williams Serena Williams Samantha Stosur Wimbledon 2013 US Open 2012
Get the latest updates on IPL Auction 2023 and check out  IPL 2023 and Live Cricket Score. Like us on Facebook or follow us on Twitter for more sports updates. You can also download the NDTV Cricket app for Android or iOS.