Flipkens ousts Venus Williams in first round at Toronto

Flipkens leveled the match with a break in the 10th game of the second frame, and once the 13th-seeded Belgian had forced the third set it was Williams who couldn't keep pace. 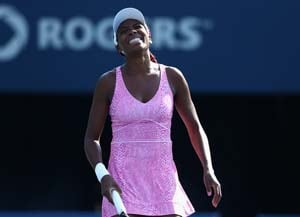 Williams, sidelined by a lower back injury since her first-round French Open exit in May, was quick out of the blocks, pocketing the first set in half an hour.

Flipkens leveled the match with a break in the 10th game of the second frame, and once the 13th-seeded Belgian had forced the third set it was Williams who couldn't keep pace.

Flipkens, who has been nursing a right knee injury herself and hadn't played since falling in the Wimbledon semi-finals to eventual champion Marion Bartoli of France, raced to a 5-0 lead in the third before Williams managed to hold serve.

Flipkens then surrendered a break, but broke Williams to seal the win and book a second-round match in Toronto with Dutch qualifier Kiki Bertens.

Williams said the ease with which she won the first set may actually have hurt her.

"I wasn't expecting to play that well in the first set, so I think in the second I just didn't handle it well," Williams said. "Then I got down in the third... I didn't make the best choices out there all the time."

Williams said she had only started practicing her serve more in the last week, and she expects it to improve before the US Open begins later this month.

"Definitely today my service games I didn't feel like myself, because usually I step up to the line, I go for it a lot. I didn't really feel like I could do that today," said Williams, who also praised Flipkens for hanging in.

"She definitely showed a lot of resilience by fighting back," Williams said. "It's never easy to lose a 6-0 set and come back."

Slovakia's Dominika Cibulkova became the first player to reach the third round of the $2.37 million tournament, shaking off a dismal first-set tiebreaker to upset eighth-seeded German Angelique Kerber 6-7 (0/7), 6-2, 7-5.

"It was a really tough match," Cibulkova said. "Angelique, she's putting everything back. Her defensive game is really good, and I just had to be patient and aggressive today. So it was not easy.

"My serve was not working like I was expecting. But in the end I made it, so I was really happy."

Cibulkova won the title at Stanford a fortnight ago, but suffered an early exit last week in Carlsbad.

After squandering a series of set points in the first set, she said she "lost herself" in the tiebreaker.

But after forcing the decisive third set, she was able to find the right balance of steadiness and aggression.

"I fought back from the 4?1 down in the third set," she said. "But it's never easy. You have to go for it. Then when you make some mistakes, then you get a little bit nervous."