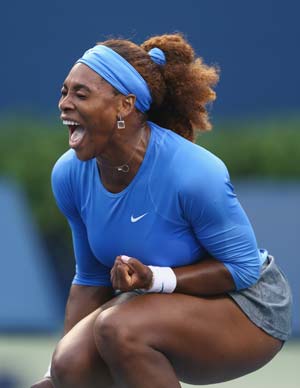 Serena Williams, who captured the Rogers Cup in 2001 and 2011, easily won her opening match this year by beating former French Open champ Francesca Schiavone in straight sets on Wednesday.

"She's a grand slam champion so I had to really focus," said Williams, who was the runner-up in Toronto in 2000. "I made a few errors but it's my first match on hard (courts) in a really long time."

Flipkens ousted Venus Williams in the first round earlier this week, but this will be the first career match between her and Serena Williams.

Serena Williams blasted five aces and won 68 percent of her first-serve points against the Italian veteran.

Williams said she is confident going forward in the tournament.

"It took me a few games to adjust to her game. Now I feel like I'm completely adjusted, and I feel good going into the next round," Williams said.

Fourth-seeded Li stormed to a 6-1, 6-4 win against Russia's Anastasia Pavlyuchenkova while seventh seed Bartoli, who won her first Grand Slam title at Wimbledon last month, took the first seven games of her match with America's Lauren Davis in a 6-0, 6-3 victory. ( Read full match reports of Li Na and Bartoli)

Bartoli said she was surprised how smoothly she rediscovered her game after her Wimbledon triumph.

"I hadn't played on hard courts for a while, and also the last two times I played in Toronto I lost in the first round," Bartoli said.

"So I just wanted to enjoy myself on the court and try my hardest, and being able to win 6-0, 6-3 was obviously pretty good for me.

"I think I played well, and I'm very pleased with the way I handled everything on the court today."

Bartoli had been scheduled to make her post-Wimbledon return in California last week, but had to pull out with a hamstring injury.

"My hamstring is getting better and better," she said Wednesday.

"I just need to take care of it every day. I was able to work with my physio back home and do some rehabilitation and strength work on it so it gets stronger.

"The summer season is a grueling season -- you have to be really fit and ready -- so I'm working on it on a daily basis to make sure I'm getting stronger and stronger."

Romania's Sorana Cirstea pulled off one of the biggest upsets of the event so far by beating world number 10 Caroline Wozniacki in three sets.

Comments
Topics mentioned in this article
Tennis Shahar Peer Victoria Azarenka Caroline Wozniacki Francesca Schiavone Wimbledon 2013 US Open 2012
Get the latest updates on IPL Auction 2023 and check out  IPL 2023 and Live Cricket Score. Like us on Facebook or follow us on Twitter for more sports updates. You can also download the NDTV Cricket app for Android or iOS.