Marion Bartoli revealed a pre-match nap in the locker room was the secret of her success as the French 15th seed raced into the Wimbledon final with a 6-1, 6-2 demolition of Belgium's Kirsten Flipkens on Thursday. 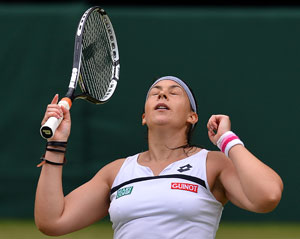 Marion Bartoli revealed a pre-match nap in the locker room was the secret of her success as the French 15th seed raced into the Wimbledon final with a 6-1, 6-2 demolition of Belgium's Kirsten Flipkens on Thursday.

Bartoli was beaten by Venus Williams in her only previous Grand Slam final appearance at Wimbledon in 2007, but she finally has another chance to win a first major title after thrashing Flipkens in a 62-minute semi-final on Centre Court.

The quirky Frenchwoman is famous for her antics on court, including a series of jumps, skips, shuffles and twirls of her racket before serving or returning.

"I felt I was just a bit tired and needed a quick nap just to recover from my early morning practise and everything else I had to do to be ready to go on court," she explained.

"I just said to Vic, the physio upstairs, to wake me up just in case!

With the leading players at Wimbledon pampered in luxurious locker rooms, Bartoli had no problems finding a cosy sofa to curl up on for her nap.

"I'm never really sleeping on the floor," she laughed. "It's in the lady members' dressing room in Wimbledon, so yeah you can have a sofa to sleep on!"

Asked if she would repeat the routine before the final, Bartoli added: "I don't really have any specific plan. It's really more about how I'm feeling.

"If I'm feeling great then I will not sleep. But if I do feel like I need one it's not a problem for me to sleep and then come back and be ready.

"So far it's worked extremely well so I don't see why I should change that."

Bartoli, tormented by injuries and illness in recent months, failed to even make the last 16 at the Australian and French Opens this year and this was her first Grand Slam last four appearance since Roland Garros in 2011.

That barren persuaded her to cut ties with her father Walter, a doctor with no previous experience of tennis who had been her coach since childhood.

Bartoli is now coached by compatriot and 2006 Wimbledon winner Amelie Mauresmo, but her father will be present for the final.

"Yeah he's coming for the final, don't worry about that," she said.

Flipkens, a former junior Wimbledon champion, had seen her ranking plummet to 262 after blood clots contracted during a flight from Thailand left her sidelined for several months last year.

The Belgian, who didn't even qualify for Wimbledon 12 months ago, admitted she was unaware of Bartoli's pre-match routine.

"I don't know what her rituals are. I just like to sleep long the night before my match, and then wake up at 9:30 or 9:45 to be prepared, eat some carbohydrates," she said.

"Each player has their own thing to do. I would have had to play 500 percent to beat Marion today. She was just too good.

"To have this memory for the rest of my life, 10 years after winning the juniors title here, is great. I would have signed for that before my career for sure."

Comments
Topics mentioned in this article
Tennis US Open 2012 Wimbledon 2013 Victoria Azarenka Marion Bartoli
Get the latest updates on IPL Auction 2023 and check out  IPL 2023 and Live Cricket Score. Like us on Facebook or follow us on Twitter for more sports updates. You can also download the NDTV Cricket app for Android or iOS.