Maria Sharapova pulls out of Stanford event due to hip injury

Sharapova and Flipkens will be replaced in the 28-player draw by world number 46 Daniela Hantuchova and Christina McHale, who is ranked 79th. 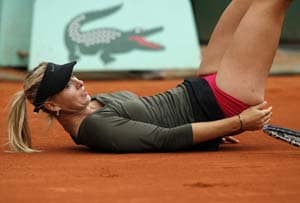 World No.2 Maria Sharapova pulled out of next week's WTA Tour Standford Classic with a nagging hip injury.

Sharapova's withdrawal on Monday has robbed the tournament of one of its biggest names. The Russian suffered the left hip injury during Wimbledon which ended earlier this month.

Hall also said Belgium's Kirsten Flipkens, who is ranked 15th overall, had pulled out. Officials did not give a reason for Flipkens's withdrawal.

With the loss of Sharapova, the top draws in the event now include recently crowned Wimbledon champion Marion Bartoli and world number four Agnieszka Radwanska. Former US Open champion Samantha Stosur, of Australia, and 2010 French Open winner Francesca Schiavone are also in the field.

Sharapova and Flipkens will be replaced in the 28-player draw by world number 46 Daniela Hantuchova and Christina McHale, who is ranked 79th.

The tournament, which includes singles and doubles players, runs from July 22-28.

Comments
Topics mentioned in this article
Tennis US Open 2012 Wimbledon 2013 Victoria Azarenka Christina McHale Daniela Hantuchova Maria Sharapova
Get the latest updates on IPL Auction 2023 and check out  IPL 2023 and Live Cricket Score. Like us on Facebook or follow us on Twitter for more sports updates. You can also download the NDTV Cricket app for Android or iOS.