Listen to the latest songs, only on JioSaavn.com
US Open 2012
Sports Home
Story ProgressBack to home

Serena Williams wins in straight sets at US Open

Misty-eyed about the retirements of her fellow tennis stars, Serena Williams finds even more resolve to keep playing long past age 30. 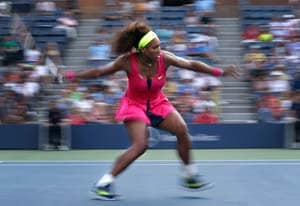 Misty-eyed about the retirements of her fellow tennis stars, Serena Williams finds even more resolve to keep playing long past age 30.

She still has the fire, no doubt, though it was partially frustrated on Thursday by some sloppy play in what nonetheless was a straight-set win in the second round of the U.S. Open.

On Wednesday, Kim Clijsters played her final singles match when she lost at the Open. A day later, while Williams was on court, fellow American Andy Roddick said he would call it a career after his run here ended.

Williams turns 31 on Sept. 26, though she certainly isn't fielding the sort of retirement questions Roddick frequently faced after her titles at Wimbledon and the Olympics this summer.

"It makes me want to stay more," Williams said. "Losing Kim was so hard. I saw her yesterday. I just hugged her. My eyes got watery. ... I didn't expect that reaction."

On Thursday, the fourth-seeded Williams overcame six double-faults and 24 unforced errors - she had 32 winners to five for Martinez Sanchez.

"I wasn't really happy with the way I was playing," Williams said. "I just wasn't happy out there today in general. I woke up on the wrong side of the bed."

She and Martinez Sanchez have a bit of a history. In the 2009 French Open third round, Williams hit a ball she was sure went off Martinez Sanchez's arm, then said the Spaniard cheated by not acknowledging it.

Martinez Sanchez has been ranked as high as 19th but is at No. 108 after struggling with a right thigh injury this year.

Williams next faces 42nd-ranked Russian Ekaterina Makarova, who beat her in the round of 16 at the Australian Open this year.

Williams rolled her ankle during her doubles match with sister Venus on Wednesday, but said she was fine after treatment.

As Williams summed it up: "Story of my ankle life."

Comments
Topics mentioned in this article
Tennis Andy Roddick Maria Jose Martinez Sanchez Leander Paes Maria Sharapova Sania Mirza Tiger Woods US Open 2012
Get the latest Cricket news, check out the India cricket schedule, Cricket live score . Like us on Facebook or follow us on Twitter for more sports updates. You can also download the NDTV Cricket app for Android or iOS.