China's Li Na, the 2011 French Open champion, is preparing for the US Open with a clean slate after hiring former Justine Henin coach Carlos Rodriguez on a trial basis to steer a comeback bid. 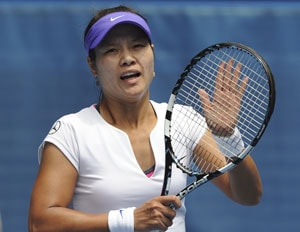 China's Li Na, the 2011 French Open champion, is preparing for the US Open with a clean slate after hiring former Justine Henin coach Carlos Rodriguez on a trial basis to steer a comeback bid.

The 30-year-old Asian star, who vaulted into international sporting icon status in her home country of 1.3 billion people, has had a hard time keeping the form that brought China's first Grand Slam title.

Without a title since taking Roland Garros some 15 months ago for her sixth career crown, Li has lost three finals this year and found modifications in her tennis and personal life were becoming more and more necessary.

After an on-again, off-again relationship with her husband as coach, ninth-ranked Li finally cut the coaching cord for good, now content to let Jiang Shan serve in his more accustomed role as life partner.

"Husband is husband and coach is coach. Otherwise, it's too tough for my mind," Li said.

Rodriguez came on board after the start of this week's Cincinnati Masters, where his ninth-seeded pupil advanced into the semi-finals over Polish top seed Agnieszka Radwanska 6-1, 6-1 in the last major tune-up to the US Open.

Rodriguez arrived in the wake not only of Jiang but also Dane Michael Mortensen, who departed 11 months ago.

Chinese No. 1 Li said the new arrangement looks promising even though she had never actually met her new mentor until he arrived on site at mid-week.

After she won her Friday quarter-final, Rodriguez was in the stands scouting potential semi-final opponents, with Li hoping first to get past top seed Agnieszka Radwanska of Poland.

Rodriguez put in 15 years with Henin as the Belgian won seven Grand Slam titles. His Chinese connection came in the period after Henin when he worked at a Beijing academy.

Li said that she realized changes were needed after Wimbledon, where she lost as third seed to German Sabine Lisicki in the second round.

"I texted my agent and said I need a new coach," she explained to media in Cincinnati. "Two weeks later, my agent said, 'Oh we have one coach.' I said, 'Perfect, I need him.' Of course I know him. I was so surprised he also wanted to help me.

"I asked many coaches and they said, 'Oh, he's a very positive person. He has good communication with the players.' I need this right now."

Comments
Topics mentioned in this article
Na Li US Open 2012 Tennis
Get the latest updates on India vs South Africa and check out  Schedule, Results and Live Score. Like us on Facebook or follow us on Twitter for more sports updates. You can also download the NDTV Cricket app for Android or iOS.