More than four years after her French Open title, Ana Ivanovic is finally back in a Grand Slam quarterfinal. 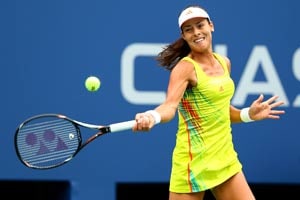 More than four years after her French Open title, Ana Ivanovic is finally back in a Grand Slam quarterfinal.

The 12th-seeded Serb beat Tsvetana Pironkova 6-0, 6-4 on Monday in the fourth round of the U.S. Open. Ranked No. 1 in the world in 2008, Ivanovic has struggled with injuries and her confidence since.

After failing to serve out the match at 5-3 in the second set, Ivanovic broke the 55th-ranked Bulgarian at love in the next game to clinch the victory.

Pironkova, a 2010 Wimbledon semifinalist, went up a break twice in the second set only for Ivanovic to immediately break back. There were seven service breaks in 10 games in the set.

Comments
Topics mentioned in this article
Tennis Vera Zvonareva Tsvetana Pironkova Ana Ivanovic US Open 2012
Get the latest Cricket news, check out the India cricket schedule, Cricket live score . Like us on Facebook or follow us on Twitter for more sports updates. You can also download the NDTV Cricket app for Android or iOS.