Someday, the fans will crowd into Arthur Ashe Stadium to watch some other American star play. 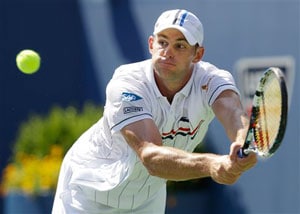 Someday, the fans will crowd into Arthur Ashe Stadium to watch some other American star play.

For now, Andy Roddick remains the man they want to see at the U.S. Open - and he's in no rush to see that change.

Roddick put at least a temporary halt to a budding American success story Tuesday with a 6-3, 6-4, 6-4 victory over 21-year-old qualifier Rhyne Williams.

Williams, who earned a wildcard into qualifying, won three straight matches last week at Flushing Meadows to get into the main draw, then suddenly found himself making his Grand Slam debut in the world's largest tennis stadium against the 2003 champion.

A tough situation for him - though more of the same for Roddick, who won his 41st U.S. Open match.

"It feels like I always play the young, American guys here," Roddick said.

Last year, Roddick defeated 18-year-old Jack Sock in Arthur Ashe Stadium. Three years ago, it was a meeting with John Isner, who was ranked 55th at the time when he beat Roddick in the third round.

This year, the opponent was Williams, who played college tennis at Tennessee, came into this week ranked 289th and whose biggest payday this year was $7,700 for making it through qualifying at Indian Wells. This first-round loss will net him $23,000, though the learning experience figures to be worth every bit as much.

Roddick, who turns 30 on Thursday, controlled this match throughout, finishing with 20 aces, and serving at a top speed of 141 mph. He left impressed with his opponent, who dropped one service break in each set but made Roddick work to close them all out.

"He did it the hard way," Roddick said. "He got through quallies, so that's a good effort by him. Hopefully we'll see a lot more of him."

Comments
Topics mentioned in this article
Tennis Rhyne Williams Andy Roddick US Open 2012
Get the latest Cricket news, check out the India cricket schedule, Cricket live score . Like us on Facebook or follow us on Twitter for more sports updates. You can also download the NDTV Cricket app for Android or iOS.