Venus Williams' next goal: 'To be like sister Serena'

The seven-time Grand Sam winner arrived in Auckland from Los Angeles on Friday and said her aim was to reach the final the WTA meet here that starts on Monday. 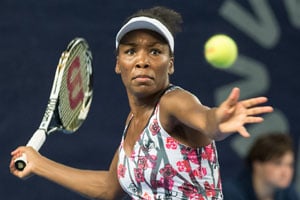 Venus Williams says she's as fit and healthy as she has been in years and hopes to turn a dream into reality when she starts her season at the Auckland WTA tournament from Monday.

The seven-time Grand Sam winner arrived in Auckland from Los Angeles on Friday and said her aim was to reach the Auckland final.

Venus said, "The other day I dreamed I had a win and I woke up and realized I hadn't even played a round. I hope to go round by round and at least get to the finals - that would be awesome."

"I feel like I'm coming into the season as fit and healthy as I have in many years, so for me that's exciting and I have a positive outlook. My goal is to be like Serena Williams!"

The 33-year-old, who won her last final in Luxembourg in October 2012, said she had been working hard during the offseason.

Comments
Topics mentioned in this article
Anastasia Pavlyuchenkova Alisa Kleybanova Venus Williams Somdev Devvarman Serena Williams US Open 2011 Tennis
Get the latest updates on IPL Auction 2023 and check out  IPL 2023 and Live Cricket Score. Like us on Facebook or follow us on Twitter for more sports updates. You can also download the NDTV Cricket app for Android or iOS.