Playing together for the first time after rejoining forces, third seeded Indo-Pak pair recorded a hard-fought 7-6(5) 6-7(2) 10-3 win over the unseeded Dutch-Romanian team in one hour and 41 minutes. 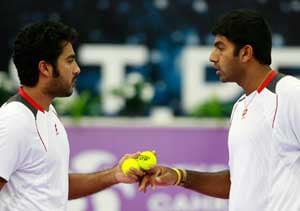 Rohan Bopanna and Aisam-ul-haq Qureshi recorded their first win after re-joining forces as they overcame a spirited challenge from Jean-Julien Roger and Horia Tecau in the first round of the ATP Apia International in Sydney on Tuesday.

They next face Treat Huey from Philippines and Briton Dominic Inglot, who ousted Spaniards Pablo Andujar and David Marrero 6-4 6-3 in their opening round of the USD 511,825 hard court event.

Bopanna and Qureshi had suffered a first round exit at last week's Chennai Open in their first match of the season.

Leander Paes and his Czech partner Radek Stepanek, seeded second, open their campaign against French pair of Julien Benneteau and Edouard Roger-Vasselin, who ended singles runner-up at the Chennai Open.

India's Somdev Devvarman had failed to qualify for the singles main draw after losing in the second round of the qualifiers.

Comments
Topics mentioned in this article
Tennis Serena Williams Somdev Devvarman Aisam-Ul-Haq Qureshi Anastasia Pavlyuchenkova Rajeev Ram Alisa Kleybanova Rohan Bopanna Su-Wei Hsieh Australian Open 2014 US Open 2011
Get the latest updates on IPL Auction 2023 and check out  IPL 2023 and Live Cricket Score. Like us on Facebook or follow us on Twitter for more sports updates. You can also download the NDTV Cricket app for Android or iOS.