Roger Federer says another child on the way in 2014

Roger Federer says on Twitter that he and his wife, Mirka, are expecting another child next year. Their twin daughters are named Charlene and Myla. 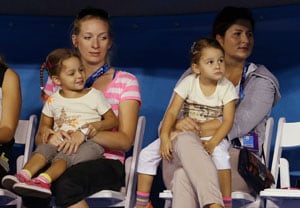 Already in the swing of parenting, Roger Federer is getting ready for a larger family.

The tennis star says on Twitter that he and his wife, Mirka (right in pic), are expecting another child next year.

Twins Charlene and Myla were born in July 2009, and Federer wrote on Wednesday, "Mirka and I are very happy to share the news" that the couple's daughters "will be big sisters in 2014!"

Federer's agent, Tony Godsick, confirmed to The Associated Press the tweet is legitimate.

The 32-year-old Federer has won a record 17 Grand Slam singles titles and spent more weeks at No. 1 than anyone else in the history of the ATP rankings.