Next up for World No.3 David Ferrer in Friday's semifinals of this Australian Open tune-up will be countryman and world No. 1 Rafael Nadal. 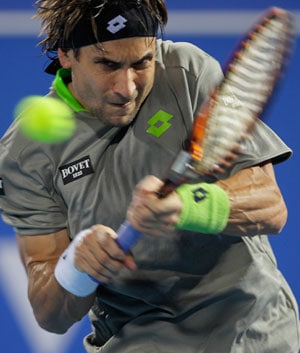 Spain's David Ferrer kicked off the new season with a convincing 7-5, 6-1 victory on Thursday over Switzerland's Stanislas Wawrinka at the Mubadala World Tennis Championship, a hard-court exhibition event in Abu Dhabi.

Wawrinka grabbed a service break early on and then took a 5-3 lead, but the world No. 3 battled back to take the next four games and the first set 7-5.

Ferrer then stepped up his aggressiveness in the second set to race out to a 5-0 lead. Wawrinka managed to avoid the "bagel" but the Spaniard wrapped up the victory after an hour of play.

Next up for Ferrer in Friday's semifinals of this Australian Open tune-up will be countryman and world No. 1 Rafael Nadal.

France's Jo-Wilfried Tsonga then spoiled the return of Scottish world No. 4 Andy Murray, who missed the end of last season after undergoing back surgery in September.

Tsonga, who won 7-5, 6-3, went down an early service break in the second set but then reeled off four straight games en route to victory in just over an hour.

The 10th-ranked Frenchman will next take on world No. 2 Novak Djokovic of Serbia in Friday's other semifinal.

The world's top players are competing in the United Arab Emirates in preparation for next month's Australian Open, the first Grand Slam event of the 2014 season.

Comments
Topics mentioned in this article
Tennis Serena Williams Somdev Devvarman Alisa Kleybanova Stanislas Wawrinka David Ferrer Anastasia Pavlyuchenkova US Open 2011
Get the latest updates on IPL Auction 2023 and check out  IPL 2023 and Live Cricket Score. Like us on Facebook or follow us on Twitter for more sports updates. You can also download the NDTV Cricket app for Android or iOS.