Roger Federer doesn't have anything to prove, says former World No.1 Ilie Nastase

Former French and US Open champion Romanian Ilie Nastase says that Roger Federer should not be advised on the proper time to quit professional tennis. 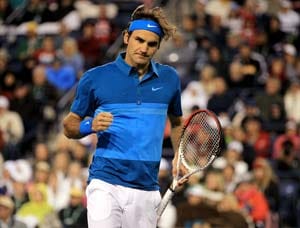 Roger Federer should be given full freedom to play on for as long as he wants to, feels former world number one Ilie Nastase. According to the Romanian tennis great, the Swiss legend should play on until he is 60.

The 17-time Grand Slam champion has slipped to sixth in the world rankings and has won one ATP title in 2013. His poor form this year has urged many to suggest that he is no longer a force to reckon with. Nastase, though, says Federer does not have anything to prove.

"I think he should play for as long as he wants. Roger Federer doesn't have to anything to prove, he can play to 60 if he wants to," Nastase was quoted as saying by the Romanian media.

Known as the bad boy of tennis in the 1970s and early 80s, Nastase says that the 32-year-old must not listen to his detractors.

"I don't agree with those people who say that you should retire when you're past your absolute best or prime. I wish people wouldn't say that Federer has to retire," he said.

Despite spending a record 302 weeks as world number one, Federer's recent has made him drop down in the pecking order to leading current stars like Rafael Nadal and Novak Djokovic. However, 67-year-old Nastase says Federer will retire when he wants to.

Nastase, who was placed at No.6 by Maxim magazine in its top ten "Living Sex Legends" list, himself retired from the Tour at the age of 39. However, he continued playing invitational seniors events into his 60s. In all, he has seven Grand Slam titles: two in singles, three in men's doubles, and two in mixed doubles. He is also the second male player to win a Grand Slam event without dropping a set and the first one to achieve this feat at the 1973 French Open. Nastase was included in the International Tennis Hall of Fame in 1991.