Rafael Nadal launched his US Open title defence with a battling 6-3, 7-6 (7/1), 7-5 victory over Andrey Golubev of Kazakhstan, but the straight-sets win was anything but easy. 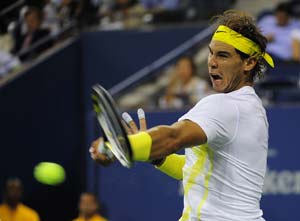 Rafael Nadal launched his US Open title defence with a battling 6-3, 7-6 (7/1), 7-5 victory over Andrey Golubev of Kazakhstan, but the straight-sets win was anything but easy.

Golubev, ranked 98th in the world, had the world number two on the run in both the second and third sets.

But the Spaniard saved seven set points in the second and rallied from two breaks down in the third to keep his dream of defending his title alive.

"Well, I was a little bit lucky to win today in straight sets," admitted Nadal, who has endured early exits at Montreal and Cincinnati in the build-up to the Open.

He was broken six times in the two-hour, 49-minute match, - losing his serve one time more than he did in the whole of last year's tournament.

But his go-for-broke style coupled with an ability to pounce on the short ball, yielded winners and helped him to a 3-0 lead in the second set before Nadal managed to narrow the gap to 3-2.

Golubev immediately broke back, and fought off two break points to take a 5-2 lead.

Serving for the set at 5-3, Golubev ran into Nadal's iron will - taking a 40-0 lead only to see the Spaniard save five set points in that game and two more in the next.

Nadal edged ahead with a break for 6-5, giving himself a second break point when he raced forward to scoop a Golubev drop shot over the net just a fraction of a inch before it bounced a second time.

Golubev's frustration was clear as he argued vehemently that the ball had bounced twice, although the video replay clearly showed Nadal had made the play.

"My feeling was it was one bounce, but I didn't know," Nadal admitted.

However, having taken the lead, Nadal dropped his own serve, and had to go to the tiebreaker to secure the set.

He again fell two breaks down in the third set to trail 5-2, but won the last five games to secure victory.

Since losing the Wimbledon final - and his world number one ranking - to Novak Djokovic, Nadal has nursed a foot injury and also burned two fingers of his right hand on a piping hot plate at a Cincinnati restaurant.

"The fingers are much better," said Nadal, who still had them bandaged but without the bulky padding he needed in Cincinnati.

Indeed, Nadal added, confidence will be the key if he is to reach the final and a possible showdown with Djokovic.

"I didn't play a lot this summer," he said. "It's normal to start with doubts, with more nerves.

"You have to find your confidence. The confidence is spending hours on court, competing better, winning matches. Today was one of the matches."