New Zealand players carried an injured Kirk McKenzie of the West Indies off the field after he struggled with cramps during the Under-19 World Cup quarter-final clash between the two sides. 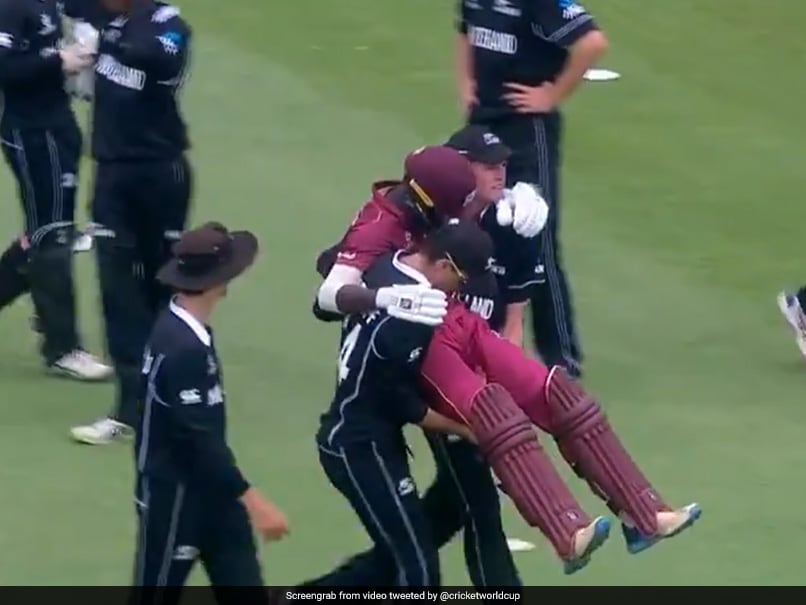 Rohit Sharma, who was the star with the bat against New Zealand in a thrilling Super Over in 3rd T20I, took to Twitter on Thursday to appreciate the heartwarming gesture shown by New Zealand Under-19 team during the second quarter-final of the Under-19 World Cup. In the knockout match, New Zealand got the better of the West Indies as they chased down the 239-run target in the last over. During the West Indies' innings, Kirk McKenzie suffered cramps and was retired hurt at the end of the 43rd over. McKenzie came back to bat in the 48th over but he was dismissed on the very next delivery by Kristian Clarke. As the West Indies were bowled out for 238, McKenzie struggled to walk off the field. Two New Zealand players came to McKenzie's rescue and carried him off the field.

"So good to see this #SpiritOfCricket at its best," Rohit Sharma tweeted while sharing the video of the incident.

So good to see this #SpiritOfCricket at its best. https://t.co/qzUZjEuRt5

In the match, the West Indies won the toss and opted to bat in the second quarter-final of the Under-19 World Cup.

Kirk McKenzie top-scored for the West Indies with his knock of 99 off 104 deliveries.

The West Indies were bowled out for 238, setting New Zealand a target of 239 to advance to the semis of the tournament.

Kristian Clarke was the pick of the bowlers for New Zealand who finished with figures of four for 25.

In reply, New Zealand lost their first wicket with just four runs on the board as Matthew Forde removed Ollie White for a duck.

New Zealand then lost three quick wickets and were 67 for four at one stage. Clarke then showed his prowess with the bat and played an unbeaten knock of 46 to help his side chase down the 239-run target with two balls to spare.

With the win, New Zealand have joined India as the second semifinalist.

Bangladesh will take on the hosts South Africa while Pakistan will lock horns with Afghanistan in the other quarter-final matches.

Rohit Sharma Cricket Under 19 World Cup 2020
Get the latest updates on IND vs NZ 2021, check out the Schedule and Live Score . Like us on Facebook or follow us on Twitter for more sports updates. You can also download the NDTV Cricket app for Android or iOS.