India will be relying on their bowling attack as well as star batsman Yashasvi Jaiswal. 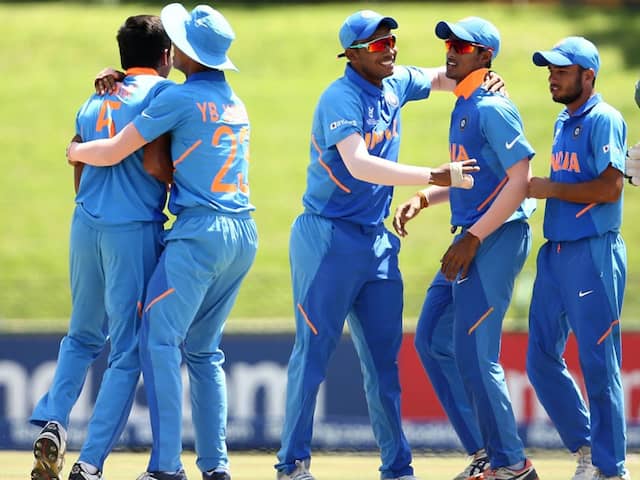 India have won the Under-19 World Cup a record four times and will be looking to add another title.© ICC

India will be looking for their fifth Under-19 World Cup trophy when they take on Bangladesh in the final at Senwes Park in Potchefstroom on Sunday. The Priyam Garg-led side have a perfect record in the tournament so far, having beaten the likes of Australia and Pakistan in the knockout stages to get to the final. Having already won the title a record four times, including the last edition in 2018, they will be looking to extend their domination at the U-19 level. Bangladesh will be playing their maiden Under-19 World Cup final, having knocked out hosts South Africa in the quarter-finals and defeated New Zealand in the semi-finals.

India will rely on their top order of Yashasvi Jaiswal, Divyansh Saxena and Priyam Garg to deliver with the bat. Jaiswal, with 312 runs under his belt, has been in sublime form in the tournament, averaging an incredible 156 in five matches. His lowest score is an unbeaten 29 and he has scored a half-century or more in every other match, being dismissed only twice.

His finest moment came in the semi-final against Pakistan. With India chasing 173, the flamboyant left-hander scored a brilliant unbeaten century as India won the match by 10 wickets.

However, India's biggest strength is their bowling attack. Pacers Sushant Mishra, Kartik Tyagi and Akash Singh have been brilliant with the new ball while leg-spinner Ravi Bishnoi has been a prolific wicket-taker throughout the tournament.

Sri Lanka's 207 while chasing 298 in the first match of the tournament was the only time a team has scored more than 200 against India in this World Cup.

For Bangladesh, Mahmudul Hasan Joy and Tanzid Hasan are players to watch out for with the bat, while left-arm spinner Rakibul Hasan will pose a threat with the ball.

Bangladesh Cricket Team Yashasvi Jaiswal Kartik Tyagi Ravi Bishnoi India Under-19 vs Bangladesh Under-19, Super League Final Cricket
Get the latest Cricket news, check out the India cricket schedule, Cricket live score . Like us on Facebook or follow us on Twitter for more sports updates. You can also download the NDTV Cricket app for Android or iOS.