Mahmudul Hasan Joy hit a century as Bangladesh defeated New Zealand by six wickets on Thursday to book a title clash against holders India in Under-19 World Cup. 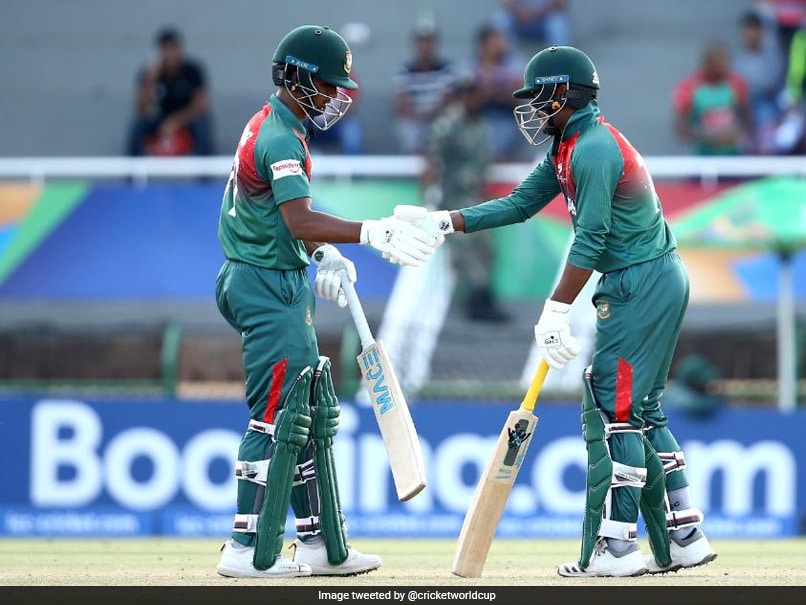 Mahmudul Hasan Joy and Shahadat Hossain stitched together a 101-run stand for the 4th wicket.© Twitter

Bangladesh stormed into their maiden ICC U-19 World Cupfinal with a comprehensive six-wicket win over New Zealand here on Thursday, setting up the title clash with record four-time champions India. Mahmudul Hason Joy rose to the occasion with a 100 off 127 balls, helping Bangladesh overcome the 212-run target in 44.1 overs. After losing the openers cheaply in the chase, Joy paired up with Towhid Hridoy (40) first before teaming up with Shahadat Hussain (40 not out) to share a 101-run stand for the fourth wicket and fashion a resounding win.

New Zealand had recovered to make 211 for eight from 74 for four, courtesy an unbeaten 75 offf 83 balls from Beckham Wheeler-Greenall.

Shoriful Islam was the pick of the bowlers for Bangladesh, taking three wickets for 45 runs in 10 overs.

The final between defending champions Indiaand Bangladesh will be played here on Sunday.

Like India, Bangladesh too are unbeaten in the tournament.

Bangladesh captain Akbar Ali said his team will have to play its best cricket to upstage India.

"We will play it as a normal game. We can't take the pressure of thinking that this is our first final. India is a very good side, and we have to play our 'A' game. We have to do the best in all three departments. Bangladeshi cricket fans are crazy, and I hope we will continue to get the same support that we've been getting," said Ali at the post-match presentation.

One can expect a close finish considering India scraped through by five runs in a low-scoring Asia Cup final against Bangladesh in September.

India were able to defend a paltry 105 by bowling out Bangladesh for 101 in the final held in Colombo.

India, led by Priyam Garg, had hammered Pakistan by 10 wickets to enter their third successive U-19 World Cup final on Tuesday with the in-form Yashasvi Jaiswal slamming an unbeaten century.

New Zealand U19 Under 19 World Cup 2020 Cricket
Get the latest updates on IND vs NZ 2021, check out the Schedule and Live Score . Like us on Facebook or follow us on Twitter for more sports updates. You can also download the NDTV Cricket app for Android or iOS.