Australia only lost two wickets on the fifth day but coasted through after lunch to finish on 263 for four with Mitchell Marsh not out on 29. 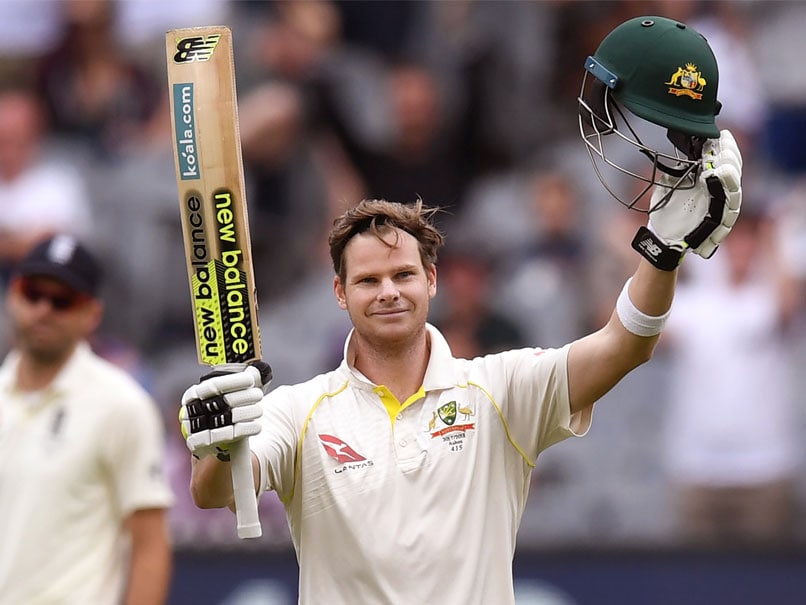 Smith and Marsh comfortably batted through after lunch.© AFP

Steve Smith scored his 23rd Test century to bat out a draw for Australia in the fourth Ashes Test and deny England their first win of the series in Melbourne on Saturday. The Australia skipper stonewalled the English bowling attack to remain unconquered on 102 for his third century of the series when the Test was called a draw late on the final day. Smith joined the legendary Don Bradman as the only batsmen to score centuries in four consecutive Melbourne Tests. He also joined Ricky Ponting as the only batsmen in Test history to have made six centuries in a calendar year on multiple occasions.

Australia only lost two wickets on the fifth day but coasted through after lunch to finish on 263 for four with Mitchell Marsh not out on 29.

The hosts have already clinched the Ashes with an unassailable 3-0 lead in the series ahead of the fifth and final Test in Sydney next week.

It was just the second drawn Boxing Day Test in 20 years, although there was criticism of the lifeless state of the Melbourne Cricket Ground drop-in pitch.

Smith and Marsh comfortably batted through after lunch to ensure England were unable to go for the win after leading by 164 runs on the first innings, following a record-breaking unbeaten 244 from opener Alastair Cook.

The Australia captain led the salvage operation in a 275-ball vigil to take his series tally to 604 runs at an average of 151.00 after losing batting partners David Warner and Shaun Marsh before lunch on the final day.

After two painstaking hours of minimal scoring, the tourists grabbed the wickets of Warner and Marsh to briefly raise hopes of grabbing their first win in an already-decided series.

Warner had looked set for his 22nd Test hundred and second century of the match before he attempted to slog the second ball of Joe Root's first over.

The ball, pitched into the foot marks, skewed into the air and James Vince took a comfortable catch in the covers to give Root the perfect present on his 27th birthday.

Warner dropped his head realising he had botched a golden chance to claim Test twin centuries for a fourth time in his career.

The normally adventurous opener played with great circumspection to keep England at bay, batting for 301 minutes and 227 balls in his slowest Test innings.

His dismissal also ended a 107-run stand with Smith, which helped Australia wipe out the innings deficit.

There was some rare excitement in the final over before lunch when Marsh edged Stuart Broad to wicketkeeper Jonny Bairstow, who took a splendid catch.

Cook was named man-of-the-match after carrying his bat in England's first innings.

It was the highest score by a batsman carrying his bat in Test history, bettering New Zealander Glenn Turner's 223 not out against the West Indies in Kingston in 1972.

The last Englishman to carry his bat through a Test innings was Mike Atherton with 94 against New Zealand in 1997.

Cook also surpassed the highest score by a visiting batsman in a Test match at the famous MCG, bettering the 208 by West Indian great Viv Richards in 1984.

There was a total attendance of 262,616 fans over the five days.

Comments
Topics mentioned in this article
Australia Cricket Team England Cricket Team Melbourne Cricket Ground The Ashes 2017-18 Steven Smith Cricket
Get the latest updates on Olympics 2020, Olympics 2020 Medal Tally, Live Cricket Score . Like us on Facebook or follow us on Twitter for more sports updates. You can also download the NDTV Cricket app for Android or iOS.