Hussey, who ended a 79-Test career with his retirement in January, said he was confident new coach Darren Lehmann could turn the team's fortunes around. 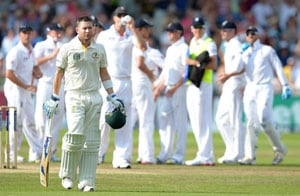 Former Australian batsman Mike Hussey said on Tuesday he felt for the national team as it enters the third Ashes Test winless, acknowledging two losses would have left a "horrible feeling".

Michael Clarke's men go into the third Test at Old Trafford on Thursday having lost the first two games of the series.

The second loss at Lord's -- by a massive 347 runs -- was Australia's sixth successive Test defeat after a whitewash in a four-Test series in India earlier this year. It is their worst run of results since 1984.

"I feel for the guys," Hussey told reporters in Melbourne.

"I've certainly been in that situation as well where we haven't been playing that well and losing games, and it's a horrible feeling in the dressing room.

"I've been in touch with a few of the guys through text messaging. I know they're very proud to be wearing the baggy green cap and I'm sure we'll see a revival in the last few Test matches."

Hussey, who ended a 79-Test career with his retirement in January, said he was confident new coach Darren Lehmann could turn the team's fortunes around despite the class England have shown on the field.

"They've got seasoned, hardened players who've been there and done it for a long period of time and know what they have to do," Hussey said of the England team.

"And they're prepared to be patient and disciplined for long, long periods of time."

Hussey, who had to wait until he was 30 to make his Test debut, said selectors needed to show faith in the current Australian team which is rebuilding after a string of retirements in recent years, including his own and that of Ricky Ponting.

"It's never easy to get in the Australian team. They're all very fine players," Hussey said.

"We need to show faith in these guys and keep believing in them."

Hussey said Lehmann would take the pressure off the players and allow them to play their own style of game.

"That gives you a chance of playing your best cricket, when you're relaxed and not having all these thoughts and doubts and stresses and pressures on your mind," he said.

"I think the guys are down and out after the previous Test match," Gilchrist told the Australian Broadcasting Corporation. "But I do think Darren Lehmann in charge will help bring that group together. I think Darren de-stresses players."

"They've just got to get into this next Test match."

Australia will be unable to regain the Ashes if they fail to win at Old Trafford.