The former West Indies legend observes that home advantage is not about changing nature of tracks but in home support. The former only spoils cricket, he says. 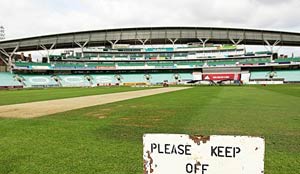 Former West Indies cricketer Michael Holding has labeled the general character of English pitches during The Ashes as 'putrid' and says Australia may have lost the series 0-3 but the touring party did play better than most people estimated.

In his column on Wisden India, Holding writes that the final scoreline was not a true reflection of how the two teams played the series. "I think Australia played a lot better than many expected and England, in my view, were below par. To be honest, both teams were brought closer together by putrid pitches," he wrote. "For the most part, they were pathetic. Only Lord's and Old Trafford could be considered good cricket pitches."

Revealing that in a comparison done for Sky Sports - the official broadcasters of the recently concluded Test series - The Oval track was found to be the slowest when compared to other venues like Sydney, Adelaide and Galle. "But you will see and hear nothing about that fact. To me, that is just plain wrong. People talk about home-team advantage, and being entitled to do whatever suits you. But it doesn't permit you to spoil a game of cricket by preparing sub-standard pitches. Home advantage means you have your home crowd, you have conditions you're familiar with."

While the England players are now going on record to say they will take their form into the return Ashes series in Australia, Holding said that the tracks Down Under are not expected to change to make things tougher for Alastair Cook and Co. "I've been going to Australia for a long time, as a player or a commentator, and I've not seen pitches change from year to year depending on who is playing."

The Ashes series in Australia starts from November 21 and the two teams will play 5 Tests.

Comments
Topics mentioned in this article
Cricket Glenn McGrath England vs India 2011 Kevin Pietersen Shane Watson Michael Holding RP Singh John Michael Arthur Joe Root The Ashes 2013 England Cricket Team Australia Cricket Team
Get the latest updates on IND vs NZ 2021, check out the Schedule and Live Score . Like us on Facebook or follow us on Twitter for more sports updates. You can also download the NDTV Cricket app for Android or iOS.