Michael Clarke is sidelined amid reports that a long-standing back injury flared up after Australia's crushing second Test defeat against England at Lord's. Ed Cowan will skipper the team in Clarke's absence. 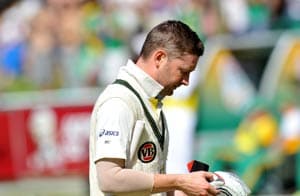 Clarke is sidelined amid reports that a long-standing back injury flared up after Australia's crushing second Test defeat against England at Lord's.

Those changes mean a surprise chance for Turner, who had been playing in the English amateur leagues for Chichester Priory Park as part of a development programme run by Cricket Australia and Hampshire.

The 20-year-old has taken 18 wickets at an average of 40.78 for the Sussex Premier League club this season.

Turner, a member of the Australia Under-19 team that finished runners-up to India in last year's World Cup, was one of six Australian Institute Of Sport scholars to be awarded a summer placement in England.

With Australia in crisis after falling 2-0 behind in the five-Test series, their hopes of regaining the Ashes suffered a further blow on Monday when pace bowler James Pattinson was ruled out for the rest of the series with a stress fracture of his lower back.

The tour match against Sussex, which starts on Friday, now serves as an opportunity for Mitchell Starc, Jackson Bird and James Faulkner to win a place in the Australia attack for the third Test at Old Trafford, which gets underway next week.