The Ashes: Michael Clarke denies being the 'new Captain Grumpy' 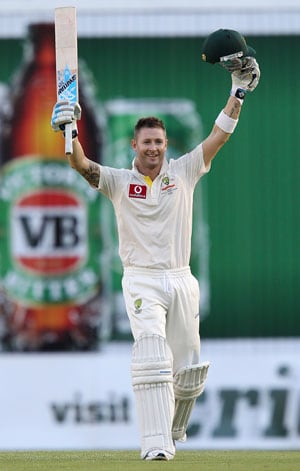 Michael Clarke isn't in Allan Border's league just yet. Border earned the nickname Captain Grumpy for his taciturn manner during his decade-long reign as Test captain that started in Australia's gloom of the 1980s and turned with a drought-breaking Ashes win in England in 1989 which set the team on course to reclaim the No. 1 ranking.

By the Ashes series-opener in Brisbane last month, Border was transformed into a cheerful broadcast analyst and Clarke had taken on the role of the stern skipper of a team that hadn't produced a win in nine tests.

Asked Wednesday if he was 'channeling Captain Grumpy,' Clarke replied bluntly: "Not at all."

In Brisbane, he would have left it right there.

But after a forced smile, and a long pause on Wednesday, he relented slightly and continued: "But I did hear that comment. I certainly haven't tried to be any different."

Clarke later laughed as he offered his suggestions for England's starting line-up for the second Test starting Thursday after naming an unchanged Australian XI for the first time in 12 months. The 381-run win in the first test has certainly helped the outward demeanor.

He said, the fact it's been so long since unchanged teams in back-to-back Tests "probably says we haven't performed as well as we'd like."

"If you look at our Test record this year, it's certainly not something to brag about."

The win in Brisbane was Australia's first since a victory over Sri Lanka in January. After that, Clarke's squad unraveled in a 4-0 series loss in India and then lost a five-Test Ashes series 3-0 in England. There's been plenty of off-field distractions in that time too.

But there's been signs of a resurgence with a more stable and composed group of players improving under Darren Lehmann, who took over as coach only weeks before the last Ashes series in England after Mickey Arthur was fired.

Despite being well overdue, Clarke said the Brisbane victory "was only one win at the start of the series."

"Our celebration after Brisbane wasn't anything like I have seen Australian teams celebrate when we have had big wins like that," he said. "And that is because everybody knows that we're a long way from being the team we want to be."

The 32-year-old Clarke has won 13, lost 10 and drawn seven of his 30 tests as captain, a job he was thrust into when Ricky Ponting retired in 2011. He initially polarized public opinion in Australia, with as many detractors as supporters because he didn't fit the no-nonsense image of the likes of Border, Steve Waugh and Ponting. But he has earned respect with his bat, scoring 11 centuries and averaging 62 since taking the helm, including 113 in the second innings in Brisbane.

The Australians were more aggressive than usual in the Ashes opener, with Mitchell Johnson unsettling the England batsmen with his consistently short-pitched bowling and the match ending acrimoniously with Clarke yelling and pointing a finger at England tailender James Anderson. Clarke was later fined because one of his curses was picked up in the TV broadcast.

Clarke denied the more aggressive approach revolved around a push to recapture the hostile approaches of Australian teams in the 1970s and early '80s.

"I don't think we as a team are trying to play like any other Australian team," he said. "The team I walked into as a young player, there was a certain brand of cricket that they always tried to play - and that was aggressive.

"And by aggressive, I mean that you're trying to take the game forward, it doesn't mean getting into domestics on the field. So when I talk about a brand of cricket, that's all I've ever known."

Comments
Topics mentioned in this article
Cricket West Indies Cricket Team Australia Cricket Team England Cricket Team The Ashes, 2013-14 Michael Clarke Shahid Afridi Jason Krejza Allan Robert Border The Ashes 2013
Get the latest updates on SA vs IND 2021-22, check out the Schedule and Live Score . Like us on Facebook or follow us on Twitter for more sports updates. You can also download the NDTV Cricket app for Android or iOS.