The Ashes: Heat of cricket vs heat wave in London

As The Ashes enters its second round, the intense rivalry between England and Australia is being matched up by a heatwave in London. A level three waning has been issued as temperatures are expected to reach 32C. 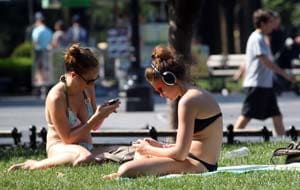 On a day England and Australia gear up for the second Ashes Test in a bid to bring each other down, there is another quite unexpected adversary threatening to tear into their strategies. A heatwave warning has been issued in London as temperatures hover around the 30 degrees celsius mark.

Weathermen in the city have predicted that the mercury could rise to 32 degrees through the course of the day - quite unnatural for the city at any time of the year. And England and Australia will face off against each other under these conditions at The Lord's Cricket Ground, from 11am (local time).

While the Australians may well be used to playing in hot conditions at home and did recently tour India, the hosts - despite playing around the globe - may not be able to adapt to the surprising heat at home too easily. After all, the intensity of the heat can be gauged from the fact that the warning issued is a level three alert - one below national level emergency. (Suggested read: England face tough choice over 2nd Test attack)

While high-risk groups - children and elderly - have been advised to take precautions, fans at Lord's may do well by taking adequate measures to shield themselves from the sun. As for the players, the heat of cricket may well face stiff competition from the actual heat on the ground and in the stadium.

Comments
Topics mentioned in this article
Cricket England Cricket Team Australia Cricket Team Glenn McGrath Kevin Pietersen The Ashes, 2013-14 Shane Watson John Michael Arthur Joe Root The Ashes 2013
Get the latest updates on IPL 2021, check out the IPL 2021 Schedule and Indian Premier League Live Score . Like us on Facebook or follow us on Twitter for more sports updates. You can also download the NDTV Cricket app for Android or iOS.