Ryan Harris took seven wickets in Australia's crushing 347-run second Test defeat at Lord's, including a first innings haul of five for 72, and four more at Old Trafford. Michael Clarke said Tests were too important for anyone to just be "given a go", referring to Jackson Bird. 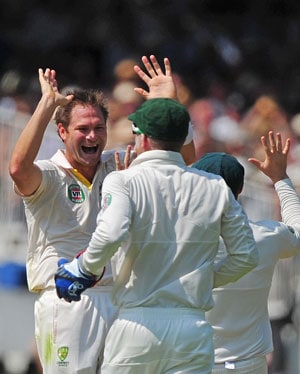 Tasmania quick Jackson Bird was added to the Australia XI that delivered a much improved performance in the drawn third Test at Old Trafford when the tourists named a 12-man squad Wednesday for the Chester-le-Street Test.

With Australia 2-0 down with two to play, and so unable to regain the urn, there are those who argue now is the right time to give the twice-capped Bird his first taste of Ashes action.

But Clarke said Tests were too important for anyone to just be "given a go".

However, only once in a 14-Test career blighted by injuries has the 33-year-old played in three successive Tests -- and he broke down in the third of those matches, the 2010/11 Boxing Day clash against England, when he suffered an ankle injury.

Clarke, though, said the fact Australia had little bowling to do on a rain-marred final day at Old Trafford would help Harris.

"In my mind I'm confident Ryano will be fine," Clarke said Thursday. "Us not bowling on that last day because of the rain is definitely going to help our bowlers.

"If he is (fit) I think he should definitely be selected. He's a fantastic bowler, his record (58 Test wickets at 22.56) shows that, and I think we've seen throughout this series how important he is to our team."

As for the 26-year-old Bird's prospects of being selected for his first Test appearance since facing Sri Lanka at Sydney in January, Clarke said he would be treated like anyone else.

"I don't think anyone is here to 'give them a go'. That's not in any Test cricket and certainly not an Ashes series, especially the position we're sitting in now. It's about picking your best 11 players."

At Old Trafford, Australia promoted David Warner up the order to open in the second innings in place of Shane Watson after the left-hander, in his first match of the series following a ban for punching England's Joe Root in a Birmingham bar in June, had returned in the middle-order.

Clarke said he was happy to have flexibility in Australia's batting order.

"I read a little bit about what Boof (Australia coach Darren Lehmann) said yesterday (Wednesday) and I agree with that.

"We've got options. Davey Warner has opened the batting in every Test match apart from one innings in his Test career and averaged close to 40.

"Chris Rogers has done really well and opened the batting his whole career in first-class cricket and so far for Australia.

"Watto's (Watson's) preferred position, he finds what best suits him is opening the batting as well.

"We have got so many openers, which is a good problem to have."

Clarke denied Wednesday suggestions of sharp practice by his side after Australia's Channel Nine alleged players in the Ashes were trying to deceive the Hot Spot camera used as part of the Decision Review System by putting silicone tape on their bats.

However, he was due to meet Thursday with the ICC's general manager of cricket Geoff Allardice regarding concerns players on both sides have expressed about the use of DRS, a repeated source of controversy this series -- a meeting the ICC stressed had nothing to do with Nine's allegations.

"It's the system we've got in place so it's about dealing with it," said Clarke. "I like DRS being there for the stinkers, the big inside edge, the blatant bat pads where you can see it's a big lbw or big caught behind.