The Ashes: Kevin Pietersen in as England recall Panesar, Taylor and Tremlett for 3rd Test

Monty Panesar, Chris Tremlett and James Taylor were given a look in for the third Test. Kevin Pietersen too was included in the 14-man squad and will have to prove his fitness before the match. 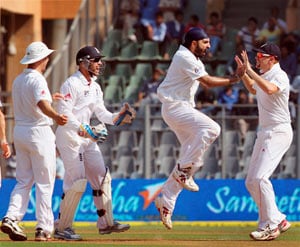 Kevin Pietersen was included in a 14-man squad for next week's third Ashes Test against Australia at Old Trafford despite concerns over his calf injury, the England and Wales Cricket Board (ECB) announced Sunday.

Star batsman Pietersen will be given time to prove his fitness for the match, which starts at the Manchester venue on Thursday, with Nottinghamshire's James Taylor added to the squad as cover.

England have also altered their bowling options by bringing in Monty Panesar as a second spinner and recalling fast bowler Chris Tremlett in place of seamers Steven Finn and Graham Onions.

Pietersen, who has been sidelined for much of this year, suffered his latest fitness setback in England's crushing 347-run second Test win at Lord's last week and could not field in the second innings.

Taylor always looked the most likely candidate to be called up as cover after the ECB sought special dispensation for the diminutive batsman to guest for Sussex in their ongoing tour match against Australia at Hove.

The 23-year-old Taylor responded by making an unbeaten 64 on Saturday's second day of three.

Taylor played two Tests against South Africa last year but didn't make the England squad for the tours of India and New Zealand, falling behind the likes of Nick Compton and Joe Root in the England pecking order.

However, he has been in good first-class form this season, scoring 824 runs in 15 County Championship appearances, including an unbeaten double century against Sussex in June.

"Kevin Pietersen is continuing his recovery from a calf strain and he will be assessed by the medical team closer to the start of the Test and we have therefore included an extra batsman in James Taylor who has been in good form for Nottinghamshire this season," said England national selector Geoff Miller in a statement announcing the squad.

Meanwhile left-armer Panesar has been included in the squad alongside off-break bowler Graeme Swann on account of Old Trafford's reputation for providing spin-friendly pitches which has endured despite the ground not having staged a Test for three years because of extensive redevelopment.

Sussex bowler Panesar last played a home Test four years ago when he held out with the bat to help guide England to a draw in the 2009 Ashes opener at Cardiff but has featured nine times abroad in recent years.

Tremlett, who starred in England's 3-1 Ashes series win in Australia in 2010/11 has not played a Test for 18 months, with injuries checking his progress. But the giant paceman has impressed for Surrey this season.

Finn played in England's narrow 14-run first Test win at Trent Bridge but was dropped for the second Test at Lord's, with all-rounder Tim Bresnan selected in his place. Durham fast-medium bowler Onions was in the squad for the first two Tests but did not play in either match.

"Chris Tremlett has worked hard to regain fitness and form following a couple of injuries and his performances for Surrey this season have been very encouraging," said Miller.

"Including an additional spinner in Monty Panesar who has plenty of international experience provides (captain) Alastair Cook and (coach) Andy Flower with a number of options," former England off-spinner Miller added.

Victory at Old Trafford would see England, currently 2-0 up with three to play, clinch the series and retain the Ashes.

However, a cautious Miller said: "The players worked hard at Trent Bridge and Lord's to get into a very good position in this Investec Ashes Series but will be fully aware that there is still a great deal of cricket left in the series."

Comments
Topics mentioned in this article
Cricket Monty Panesar Joe Root The Ashes 2013 Kevin Pietersen Steven Finn Glenn McGrath Shane Watson Chris Tremlett James Taylor John Michael Arthur Australia Cricket Team
Get the latest updates on India vs South Africa and check out  Schedule, Results and Live Score. Like us on Facebook or follow us on Twitter for more sports updates. You can also download the NDTV Cricket app for Android or iOS.