Fast bowler Chris Tremlett has also been selected alongwith Onions, with all 11 players who took the field at Old Trafford included as England look for a series victory 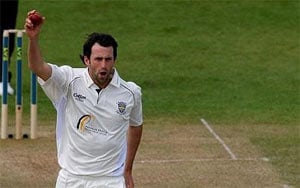 England gave Durham paceman Graham Onions the chance of playing the fourth Ashes Test on his Chester-le-Street home ground after including him in a 13-man squad.

Just hours after England had retained the Ashes courtesy of a rain-affected draw in the third Test at Old Trafford on Monday, the selectors unveiled their squad for the fourth match of the series, which starts at north-east county Durham's headquarters on Friday. (Also read: Cook savours 'great if strange' success)

Fast bowler Chris Tremlett was also selected, with all 11 players who took the field at Old Trafford included as England look for a series victory after winning the first Test at Trent Bridge by 14 and the second, at Lord's, by a colossal 347 runs.

But there was no place for in-form batsman James Taylor, who'd been in the 14-man squad at Old Trafford as cover for Kevin Pietersen.

But star batsman Pietersen, who had been struggling with a calf problem, made 113 in England's first innings 368 at Old Trafford.

"While the players should be congratulated on retaining the Ashes there is still a lot of cricket left in this series and it is important that the players recover and refocus ahead of another crucial week of Test cricket," said England national selector Geoff Miller.

"The inclusion of Graham Onions and Chris Tremlett gives (coach) Andy Flower and (captain) Alastair Cook an opportunity to assess both the fitness of the bowling attack following the third Test as well as the conditions at Durham," the former England off-spinner added.