The Ashes build-up: Jackson Bird happy to be a support bowler for Australia

Australia's combination for the first Test against England starting July 10 is not clear yet but Pattinson and Starc seem certainties after fine performance in the first warm-up. This leaves James Faulkner, Siddle, Ryan Harris and Bird to fight for the remaining spot/spots. 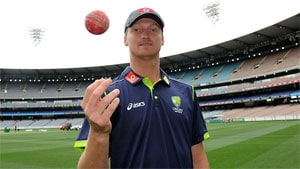 Australian medium-pacer Jackson Bird, who has impressed many in his short international career till now, came up with a brilliant bowling spell of 4/38 on Wednesday to restrict Worcestershire to 246/7 at stumps on Day 2 in a tour match. The English side still trails the Australians, who scored 396/4 (declared), by 150 runs with three wickets in hand.

The 26-year-old Tasmanian was relentless in his attack and even had the scalp of England Test hopeful Nick Compton (79). Bird, who may not be as quick as some of his mates - Mitchell Starc, James Pattinson and Peter Siddle - depends on his nagging line and length to trouble batsmen. The man himself acknowledges this and is more than happy to play the role of a support bowler.

"I suppose I give them something a little bit different," Bird said after the day's play. "Guys like Starc and Siddle and Patto bowl quite fast, swing the ball a little bit, and I suppose I don't really swing it that much.

"Those guys can go for a few runs because they're such attacking bowlers. I just tend to try to not go for any runs. It think it gives them something different but in saying that there's a good group of fast bowlers in the squad."

Australia's combination for the first Test against England starting July 10 is not clear yet but Pattinson and Starc seem certainties after fine performance in the first warm-up. This leaves James Faulkner, Siddle, Ryan Harris and Bird to fight for the remaining spot/spots.

In his Australia career till now, Bird has taken an impressive 11 wickets at 16.18. More in the Glenn McGrath mould, the tall quickie has found full fitness but does not see himself as the 'automatic' choice for first Ashes test.

"Definitely. There's been a lot of hype over this Ashes series. I'm just looking forward to it if I get the chance," said Bird, who has fully recovered from stress fractures he'd suffered in India.

Bird may have been done in by over-confidence when he travelled to UK with Australia A last year. That experience though stands him in good stead now and he is upbeat for the challenge.

"I came over here last year just thinking I was going to swing and seam blokes out from ball one and I found out quickly that the wickets are pretty flat," he said.

"It's generally when the overhead conditions are in your favour that the ball tends to move around and I suppose I went searching for wickets. I had to rein that in pretty quickly and go back to what serves me best."