The Ashes: Australia to give debut to James Faulkner, recall Mitchell Starc 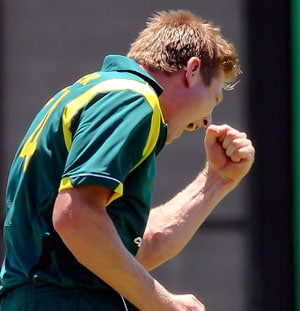 Australia captain Michael Clarke said on Tuesday the tourists would give a Test debut to fast-bowling all-rounder James Faulkner and recall Mitchell Starc as they sought a consolation win in the Ashes finale.

"I do have a team. We have two changes. Jackson Bird is out and Usman Khawaja is out so Mitchell Starc comes in and James Faulkner makes his debut," Clarke told reporters at The Oval on Tuesday, the day before the match at the south London ground.

The 23-year-old Faulkner replaces out-of-form batsman Khawaja, who averaged just 19 in three successive Tests, after Australia coach Darren Lehmann warned his failing top-order their places were in danger following the team's latest collapse, which helped England to a 74-run win in the fourth Test at Durham and an unbeatable 3-0 series lead.

Tasmania's Faulkner, a left-arm fast-medium bowler and right-hand batsman, has played eight one-day internationals and three Twenty20s but has yet to score a hundred at any level of senior domestic or international cricket.

"He is a fighter and a competitor and although he might not look the best all the time, he will do his best to stay out there and help his partner make a hundred or bat with the tail to help them through," Clarke said.

"The better conditions there are for batting, the better bowler he is. I think he is the right character for this team and you will see how much talent he's got in this Test match."

All-rounder Shane Watson, who started the series as an opener before moving to number six, is now set to bat in the number three position previously occupied by Khawaja.

Starc played in Australia's 14-run first Ashes Test defeat at Trent Bridge, was dropped for the 347-run second Test loss at Lord's only to be recalled again for the drawn third Test at Old Trafford and left out once more at Durham.

But he has now got his chance again after paceman Bird failed to impress in the fourth Test.

Monday saw Starc criticise his in-out treatment by the selectors, with the bowler telling Australia's Fairfax Media: "I guess it would be nice to get a few games back to back and get that rhythm.

"But to have a chance at that consistency that everyone talks about -- 'you've got to be more consistent' -- well, it's a bit hard when you play one game and you're dropped."

Clarke, responding to Starc's remarks, said: "Again it's not about the individual player. My comments stand that if you perform well enough you won't be dropped."

The latest decisions by coach Darren Lehmann and wicketkeeping great Rodney Marsh, the two Australia selectors on tour -- national selector John Inverarity is in England but as a 'consultant' and to give a casting vote if required -- means 17 out of the 18-strong squad will have played in this Ashes series.

The only exception is reserve wicketkeeper Matthew Wade, who was being considered as a batsman only at The Oval, having scored hundreds in two of Australia's last four wins.

Yet with Australia having gone eight Tests without a victory, a run dating back to their 4-0 series loss in India earlier this year, Wade was unable to force his way back in.

England, bidding for a first 4-0 home Ashes series win, will have to make at least one enforced change after all-rounder Tim Bresnan was ruled out with a season-ending back injury.

However, England captain Alastair Cook said earlier Tuesday he would not announce his side until Wednesday's toss.