The Ashes: Australia include Jackson Bird amid Ryan Harris concerns

Bird who played the last of his two Tests against Sri Lanka in Sydney in January, was brought in amid concerns regarding fellow paceman Ryan Harris's ability to feature in back-to-back matches. 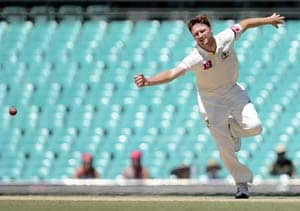 Jackson Bird could play his first Test of Australia's tour of England after being named Wednesday in a 12-man squad for the fourth Test at Chester-le-Street starting Friday.

As expected, after an improved showing in the drawn third Test, albeit a result that meant Australia couldn't regain the Ashes after defeats at Trent Bridge and Lord's, the 26-year-old Bird was the only addition to the tourists' Old Trafford XI.

Bird who played the last of his two Tests against Sri Lanka in Sydney in January, was brought in amid concerns regarding fellow paceman Ryan Harris's ability to feature in back-to-back matches.

If Harris plays on Friday, it will be only the second time in his injury-prone career the 33-year-old has played in three successive Tests.

The first occasion saw him break down in the third of those matches, the 2010/11 Boxing Day Ashes Test against England, when he suffered an ankle injury.

Harris has so far played just 14 Tests in a career blighted by shoulder surgery last year and a chronic knee injury.

During Australia's tour of the West Indies last year, Harris was left out despite taking five wickets in 37.4 overs and making a fifty in the Barbados Test, with just three days -- the same gap he's facing now -- between that match and the next Test in Trinidad.

In Manchester, Harris bowled 38 overs and was occasionally off the field due to a stomach complaint.

There were times when he looked close to exhaustion but, with most of Monday's final day washed out, Australia coach Darren Lehmann was optimistic about Harris's chances of playing at Chester-le-Street.

"I think he's a reasonable chance. If he'd bowled (a lot in the second innings in Manchester) I wouldn't think he would be a chance at all," Lehmann said after Monday's close.

"We'll just have to see how he pulls up...and see how he goes at training."

By announcing their 12-man squad two days out from the game, Australia have signalled there will be no recall for teenage spinner Ashton Agar while, as predicted, Phillip Hughes, Ed Cowan, Matthew Wade and James Faulkner have also missed out.