Dropped from the first Ashes Test on disciplinary grounds, Warner will be playing for Australia A. Border feels the left-handed opener should have remained in England and trained in the nets. 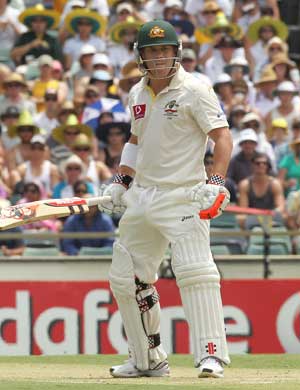 Former Australian skipper Allan Border feels that instead of being shipped to Zimbabwe and South Africa as part of Australia A team, David Warner should have been allowed to train in the nets and earn an Ashes spot.

The explosive opener was dropped on disciplinary grounds from the opening Ashes Test which Australia lost at Nottingham by 14 runs. Warner was involved in an unfortunate bar-room incident where he was accused of punching England's Joe Root after losing a Champions Trophy match at Birmingham. (Also read: Warner 'gutted' by any role in Arthur's axing)

While his off-field antics have been severely criticized, Border says he can't understand why Warner's search for form on the field should take him to Africa.

"I get the thinking, send him to South Africa and Zimbabwe to find form and bring him back later in the series, but I strongly disagree with it. It defies belief David Warner is about to leave the Ashes tour for an Australia A tour of Africa," Border said.

Warner's last Test for Australia was against India earlier this year. He had 195 runs from 8 innings at an average of 24.37 in the series which went horribly wrong for his side. While new coach Darren Lehmann has said that the team has since learnt from its follies in the sub-continent, 57-year-old Border is sure Warner too can best learn and hone his skills in England.

"He would be far better served facing (Australia pacer) James Pattinson in the nets. The standard of bowling he will face in Africa and the conditions will be chalk and cheese to the challenges that await him in England," Border wrote in his column for Sydney Morning Herald.