Nathan Lyon took four wickets to restrict England to 238/9. This was after they were cruising at 149/2 just before tea. 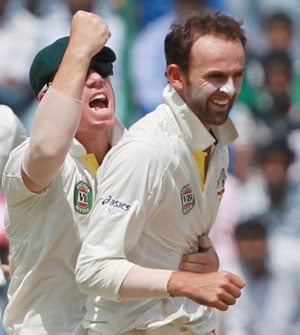 An improving Australia is threatening to make life trickier for the hosts in the fourth Test at Chester-le-Street. Catch all the highlights of the match here: (Scorecard | Commentary)

22:07 (IST): Jonny Bairstow (14) is lbw to Lyon as he tries to sweep across the line. He appeals the decision but the on-filed call stands as hawk-eye shows the ball hitting the stumps. England 193/7 in 77.3 overs.

21:54 (IST): Siddle strikes after Clarke reviews an lbw appeal turned down against Prior and Australia have their wicket. England 189/6 in 75 overs. 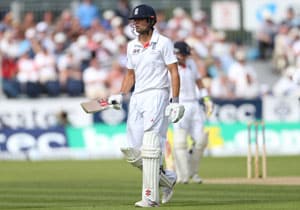 20:11 (IST): TEA! Second session belongs to Australia as Nathan Lyon and Jackson Bird take wickets just at the right time to give visitors the edge. Ian Bell and Jonathan Bairstow are at the crease and in good form as well. England 155 for 4 after 55 overs.

20:02 (IST): WICKET! Alastair Cook departs after scoring 51. Cook's gritty knock comes to an end as he is trapped lbw by Jackson Bird, who gets his first Ashes wicket. It pitched on the off and nipped back in sharply. England 153 for 4.

19:45 (IST): WICKET! Kevin Pietersen makes a long way back. Michael Clarke gambles to bring in Nathan Lyon. He keeps it outside off, tempted KP plays it late only to find an outside edge to keeper Brad Haddin. England 149 for 3 after 50 overs.

Don't get scared of the ghost at Lumley castle Watto... #Ashes pic.twitter.com/FgvNdHCp9S

19:13 (IST): Kevin Pietersen, the new man in, has started his innings solidly as he takes the attack back to bowlers. England 120 for 2 after 42 overs. 19:00 (IST): WICKET! Nathan Lyon removes Jonathan Trott. Lyon bowls it straight as Trott, looking for his 18th Test fifty, goes on the backfoot to play it on the on side. But gets a faint inside edge onto pads which carries to short leg area, where Usman Khawaja dives to his right to complete the catch. England 107 for 2.

18:18 (IST): Jackson Bird starts after lunch. Still no sign of spinner Nathan Lyon as Ryan Harris joins him. England 68 for 1 after 28 overs. 17:30 (IST): LUNCH! That's the end of the first session's play on Day 1 with England losing just one wicket. Australia used four bowlers - all pacers - with Nathan Lyon yet to bowl his first over in this 4th Test. England 57 for 1 after 27 overs with Alastair Cook 21* and Jonathan Trott 13* at the crease.

16:38 (IST): WICKET! Shane Watson removes Joe Root. It was a pitched up delivery and Root just got a faint edge to keeper Brad Haddin. Umpire gave him not out, but Michael Clarke reviewed and it went in their favour. England 34 for 1.

16:30 (IST): It's been an hour into the first session and drinks break has been taken. Australian pacers are still in search of their first wicket. England 31/0 after 14 overs. 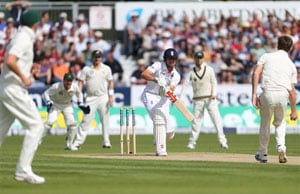 15:38 (IST): Ashes debutant Jackson Bird shares the new ball with Ryan Harris, who started with a maiden. England 3 for no loss after 2 overs.

15:00 (IST): TOSS! England have decided to bat against Australia. Australia have made one change in their squad - Jackson Bird replaces Mitchell Starc. Big news is that Pacer Ryan Harris is playing. England go in with an unchaged squad, meaning no place for local lad Graham Onions. (Read toss report)

Cook & @MattPrior13 taking a look at the pitch #Ashes pic.twitter.com/pdgEdKoWE5

13:46 (IST): England coach Andy Flower joined the captains of both sides in calling for improved use of the Decision Review System in the remaining two Ashes Tests against Australia. Once again the use of DRS by the officials this Ashes was a major talking point after yet more contentious rulings in Manchester. "Firstly umpiring is a very tricky business but I would say that there are very clear protocols to use and to stick to and I think some calm decision-making needs to be made over the next two Tests," Flower said a day after the England retained the Ashes.

Wishing all my friends across the world Eid Mubarak..

12:50 (IST): England have given Durham paceman Graham Onions the chance of playing the fourth Ashes Test on his Chester-le-Street home ground after including him in a 13-man squad. (Read full story) 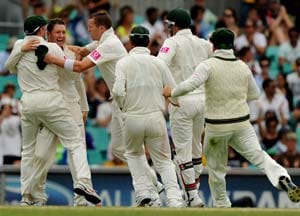 12:30 (IST): Australia captain Michael Clarke said drawing the Test series with England would still be a notable achievement after dreams of regaining the Ashes were washed away in Manchester. "If we can level the series we will take a lot of confidence back to Australia," said Clarke, man-of-the-match at Old Trafford for his brilliant first innings 187. (Read more)

12:15 (IST): After the lows of Lord's, when the Australians capitulated to a 347-run loss in the second test, came the optimism of Old Trafford. Their misfiring batsmen finally got in the runs, with Clarke hitting a brilliant 187 and both Steve Smith and Chris Rogers falling just short of centuries. And their bowlers continued to look dangerous, particularly pacemen Ryan Harris and Peter Siddle and recalled offspinner Nathan Lyon. The match was washed out as a draw, ensuring England retained the urn in the most anticlimactic of ways.