At Friday's close Ashes-holders England were 52 for two in reply to Australia's first innings 527 for seven declared, a deficit of 475 runs, in a match the tourists, 2-0 down with three to play, had to win to stand any chance of regaining the urn. 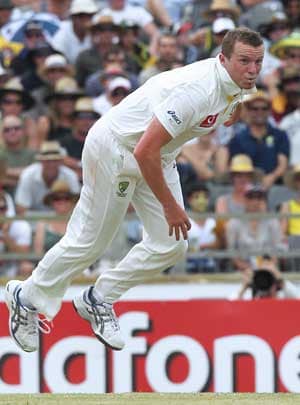 At Friday's close Ashes-holders England were 52 for two in reply to Australia's first innings 527 for seven declared, a deficit of 475 runs, in a match the tourists, 2-0 down with three to play, had to win to stand any chance of regaining the urn.

England captain Alastair Cook, dropped on 15, was 36 not out and Jonathan Trott two not out after Clarke, whose innings was his highest against England, enterprisingly declared not long after tea. (Highlights)

Aggressive seamer Siddle was, surprisingly, the fifth of five Australia bowlers deployed by Clarke on Friday.

But he responded by taking two wickets for two runs in 12 balls. (Day 2 in pics)

Siddle removed Joe Root, fresh from his 180 in England's crushing 347-run second Test win at Lord's, with the opener caught behind for a painstaking eight off 57 balls.

He then had nightwatchman Tim Bresnan well held by wicketkeeper Brad Haddin.

Replays showed Bresnan hadn't made contact, the ball hitting his trousers, but, following consultation with Cook, there was no review.

Australia came into this match on the back of six straight Test defeats -- their worst run since 1984.

Star batsman Clarke, rather like Allan Border at the start of the Australia great's captaincy career in the mid-1980s, has often had to compensate for the weaknesses of his top-order colleagues.

England's attack was led by Graeme Swann, the off-spinner's figures of five for 149 in 41 overs representing his 17th 'five-for' in 55 Tests.

But perhaps the most remarkable return of all belonged to England spearhead James Anderson, who finished with none for 116 in 33 overs on his Lancashire home ground.

Australia resumed on yet another sunny day well-placed on 303 for three with Clarke 125 not out, after scoring the tourists' first century this series, and Steven Smith 70 not out.

Clarke, on 136, drove uppishly off Bresnan only for Swann, very close in at short extra-cover, to parry the fast-travelling chance above his head.

A single then saw Clarke, who won the toss, surpass his previous highest Test score against England of 136 at Lord's in 2009. 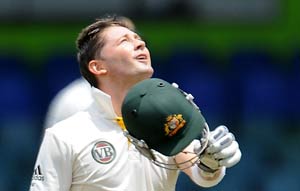 But a stand eventually worth 214 ended when Smith top-edged a slog off Swann's sixth ball of the day and holed out on 89 to Jonny Bairstow at midwicket, leaving Australia 343 for four.

New batsman David Warner was booed by spectators on his way to the middle having missed the first two Tests of this series after being banned for punching Root in a Birmingham bar in June.

Warner did not stay long, the left-hander out for five when an edge off Swann deflected via wicketkeeper Matt Prior's thigh to Trott at slip.

Warner requested a review, despite a clear nick, and, with replays conclusive, he walked off to yet more jeers.

Clarke's more than seven-hour innings of 314 balls with 23 fours ended when, cramped for room, he played on to Stuart Broad as the paceman took his 200th Test wicket.

But Haddin, dropped by Prior off Anderson on 10 before making 65 not out, and Mitchell Starc, whose 66 not out was worthy of a top-order batsman not a tailender, added an unbroken 97 for the eighth wicket.

Lyon almost had a wicket with his third delivery when he took Cook's outside edge only for the ball to hit Haddin on the leg, when the wicketkeeper should have done better, with Clarke unable to grasp the rebound at slip.