Tim Bresnan was seven not out and James Anderson four not out after Ian Bell made 109 and Steve Smith scalped three late wickets on Day 1 of the second Ashes Test between England and Australia on Thursday. 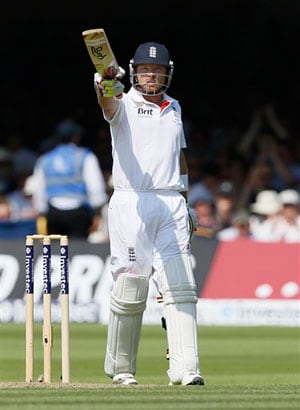 Ian Bell's third hundred in successive Ashes matches saw England fight back against Australia in the second Test at Lord's on Thursday. (Match Scorecard | Day 1 highlights - as it happened)

Ashes-holders England were 289 for seven at stumps on the first day, having been in dire straits at 28 for three when Bell came in. (Also read: Ryan Harris shrugs off injuries to avenge agony)

Yet just when it seemed England had regained control, part-time leg-spinner Steven Smith took three wickets for 18 runs in six overs late in the day.

Tim Bresnan was seven not out and nightwatchman James Anderson four not out at the close.

Bell's 109 was the same score as he made in the second innings of England's 14-run first Test win at Trent Bridge last week, with both these centuries following his 115 in the final match of the 2010/11 Ashes in Sydney.

Bell, together with Warwickshire colleague Jonathan Trott (58) and Jonny Bairstow (67), shared partnerships of 99 and 144.

Yet England's grip was loosened when Smith dismissed Bell, Bairstow and Matt Prior.

"Today was about trying to get as many runs as we could and if that comes with it that's good," said Bell of his record-equalling century.

"Credit has to go to Australia, (Ryan) Harris coming back into the team bowled well. Jonathan Trott and myself had to leave really well.

"You know Australia are just going to keep coming at you and you've never got enough (runs).

"If the dry conditions stay we know we have quality bowlers who can bowl reverse swing and then later on spin will come into it."

After the teams were presented before play to Queen Elizabeth II, monarch of both Britain and Australia, it was the tourists who bossed the early exchanges.

Shane Watson got the ball rolling for Australia when he brought one back into Cook's pads to have the left-hander lbw for 12.

Harris, recalled after Australia dropped the wayward Mitchell Starc, then took two wickets in an over.

The 33-year-old, playing just the 13th Test of his injury-ravaged career and first in more than a year, had Root lbw in his third over.

Root referred the decision and after all the controversy surrounding the use of the Decision Review System (DRS) in the first Test, it was no surprise that New Zealand's Tony Hill, now in the third umpire's chair, took several minutes before upholding Sri Lankan on-field official Kumar Dharmasena's decision that the ball had hit pad first.

Four balls later, Harris shaped a delivery up the slope which Pietersen, on two, nicked to wicketkeeper Brad Haddin.

Often criticised for slow scoring, the fluent Trott had scored 11 fours when he top-edged a pull off a Harris short-ball to give Usman Khawaja a simple catch at deep square leg.

Bairstow, on 21, was bowled by Peter Siddle but was told to wait as Dharmasena asked Hill to check for what turned out to be the slightest of no-balls. 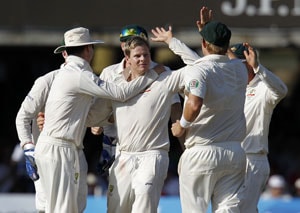 But the next saw him edge a leg-break to Clarke at slip to end a more than five hour innings including 16 fours.

Then 271 for five became 274 for six when Bairstow, still to score a Test century, carelessly chipped a Smith full toss straight back to the bowler.

Smith's purple patch of three wickets for 12 runs in 22 balls continued when Prior was caught behind by Haddin.