Stuart Broad plays second fiddle to no one

Lest we forget his contribution as rain helped England save face and retain the urn at Old Trafford. 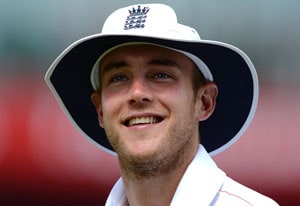 Quite simple, England were out-batted by Australia in the third Ashes Test at Old Trafford and if not for the notorious Manchester rains, the battle for the urn would still be on. England can relish the Ashes for a further few months at least, and could do worse than tip hats to Stuart Broad, who played a rather understated but crucial role a few days ago.

With James Anderson having a rare off Test and Tim Bresnan effective but never exemplary, Broad probed and pleaded with a surprisingly dogged Aussie top-order for much of the first two days. Stuck on 199 Test wickets, Broad's petulant habit of walking off the field after almost every spell was rather infuriating. 55 overs after he dismissed Michael Clarke lbw in the first innings at Lord's, Broad finally had reward and a round-figured wicket column.

A back-of-a-length delivery nipped in and cramped Clarke for room, who could only drag it back onto his stumps. Broad had his 200th and - at that stage - England had hope. At least Broad didn't have to wait as long as Chris 'Phantom' Martin, who took almost 10 months to take the one wicket required to complete his second century.

With his height and the fact that - without Steven Finn - he is the fastest bowler in England's ranks, Broad was the only one who seemed to cause Clarke any bother during his exquisite innings of 187. Michael Holding was pleading for the English pacers to bowl short to Clarke (because of his back problem) and Broad duly obliged. He became the 15th Englishman to take 200 Test wicket and at 27, is the second youngest to do so - behind Ian Botham.

With his personal goal achieved, it was Broad's turn to contribute with the bat. England resumed their first innings on Day 4 at 294/7, trailing by 233 runs, and the possibility of defeat a very obvious reality. On the morning of the fourth day, Broad batted stubbornly as he soaked in the applause for each boundary as the visitors appeared frustrated. To cap it all off, Broad edged Nathan Lyon to Brad Haddin and without waiting for the finger, he walked! Cue shock and further applause...

Broad made a 66-ball 32 and his dissent, debauchery and impressive acting from the Trent Bridge Test was all but forgiven. #BroadWalk began to trend on a social networking platform while some suggested naming a street after him - for walkers only! Stuart Broad had played his part in retaining the urn.

Kevin Pietersen's dismissal in the second innings showed Broad's elevation from a quizzical youngster who was hit all over Durban by Yuvraj Singh to a senior statesman in the English setup. As Pietersen mouthed off after being given out rather controversially, Broad - with arms crossed on the Old Trafford balcony - shook his head with condescension at the decision but an underlying knowledge that all would be well. A blond-haired sidekick no more, Broad now demands respect and in some quarters commands it.