Pietersen is now in line to play in the second Twenty20 against New Zealand at The Oval on Thursday. He is set to play for England in their pre-Ashes warm-up against Essex before the first Test against Australia on July 10. 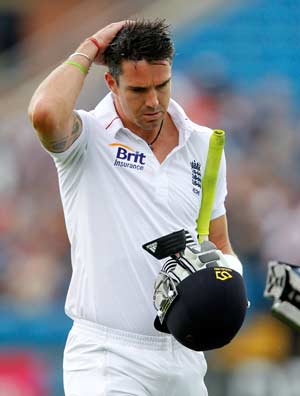 Kevin Pietersen admitted on Friday that he'd made mistakes over the incident that saw him dropped by England on disciplinary grounds last season before he returned to the side.

Former England captain Pietersen returned to competitive cricket after three months out with a right knee problem by playing for Surrey in a four-day match away to Yorkshire.

He marked the occasion by giving a radio interview to former England team-mate Darren Gough broadcast while he fielded at Headingley.

It was at the Leeds ground, where having made a superb Test hundred against his native South Africa, Pietersen gave a press conference where he said "it's tough being me in this dressing room".

He was then dropped from the Test side amid reports he'd sent provocative messages to South Africa players, some reportedly critical of then England captain Andrew Strauss, and omitted from the World Twenty20 squad before being accepted back into the side across all formats.

"I probably didn't go about it in the best fashion," Pietersen told Gough on Talksport Radio.

"You make mistakes and you get over them and that's the way you grow as a human being, by learning from things that you don't do well.

"So I take it on the chin, no dramas, it's just a case of looking forward and making sure that you do the right things now."

Pietersen is now in line to play in the second Twenty20 against New Zealand at The Oval on Thursday.

He is set to play for England in their pre-Ashes warm-up against Essex before the first Test against Australia on July 10.

The 32-year-old is keen to become fully involved with England again, saying he felt awkward visiting the dressing-room as an injured player.

"Having played for England for what, eight years, you know you're injured but you don't feel the same in the dressing room

"You feel totally out of the system. It's just the feeling you get.

"If somebody's injured, whenever they come back in the dressing room and I'm fully fit you don't have that feeling towards them, but you are treading on eggshells as an injured player walking around the dressing room, thinking 'should I be here?'.

"I've played 94 Test matches and 100-and-however-many international one-dayers, Twenty-20s..I've been around since 2004 and you still get that 'Right, I'm an injured player' feeling. "Sport gets you in, and it gets you out real quick."

Pietersen insisted his latest injury had been one of the worst of his career.

"(It was an) extremely badly bruised bottom of the femur, the bone in the knee. It was really bad," he said.

"In New Zealand I couldn't duck a bouncer, I couldn't sweep, I was in all sorts of trouble. I was on the strongest painkillers and eventually my stomach just gave up with me in the second Test match.

"I probably did it a lot of damage by playing, but I just tried to get through and played for as long as I could because I hate missing Test matches.

"A bruising on your bone is a lot worse than breaking it. You know with a break it'll be back.

"The bruising has been really frustrating but over the last three weeks I turned a real positive corner."