England captain Andrew Strauss was hailed as an "outstanding leader", as he became only the ninth England player to appear in 100 Tests when leading the side against South Africa at Lord's on Thursday. 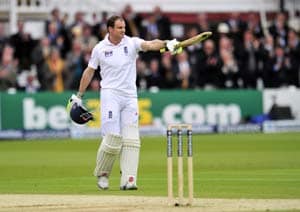 England captain Andrew Strauss was hailed as an "outstanding leader", as he became only the ninth England player to appear in 100 Tests when leading the side against South Africa at Lord's on Thursday.

The match, also Strauss's 50th as England captain, was taking place on the Middlesex batsman's home ground, where he scored a hundred on Test debut against New Zealand back in 2004.

England and Wales Cricket Board (ECB) chief executive David Collier said: "Nobody should be in any doubt whatsoever about the value of Andrew Strauss's contribution to the England team and the vital role he has played in taking our Test side to the top of the ICC's Test rankings.

"His record of 21 Test hundreds (one shy of England's all-time record) speaks volumes about his qualities as an opening batsman; he has been an integral member of three Ashes-winning sides -- twice as captain -- and as well as being an outstanding leader and a consummate professional, is a superb ambassador for the sport as a whole.

"It is fitting that Andrew should reach this momentous landmark on the ground where he has played so much cricket for both his county and his country and where he first announced himself as an international cricketer with a marvellous debut Test hundred against New Zealand in 2004," Collier added.

The build-up to this Test has seen Strauss having to deal with the fall-out from the controversy surrounding England's decision to drop Kevin Pietersen from the side for sending text messages to South African players, some of which were said to be critical of the left-handed opener.

England, 1-0 down in this three-match series, must win the third Test at Lord's to prevent South Africa replacing them as the number one-ranked Test side.

England players to have appeared in 100 Tests:

Comments
Topics mentioned in this article
Cricket Eoin Morgan Andy Flower The Ashes, 2013-14 Andrew Strauss The Ashes 2013
Get the latest updates on ICC T20 Worldcup 2022 and CWG 2022 check out the Schedule, Live Score and Medals Tally. Like us on Facebook or follow us on Twitter for more sports updates. You can also download the NDTV Cricket app for Android or iOS.