Animosity for Shane Warne and Ricky Ponting in England turned to grudging admiration. Warner's Test career is in its infancy and the only way is forward. 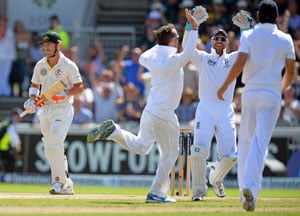 It took almost four sessions for the Old Trafford crowd to get what they had been waiting for. For over a day of the third Ashes Test in Manchester, Steven Smith and Michael Clarke in particular had denied those seated, standing or blocking the batsmen's eyeline the opportunity to give David Warner a 'reception' normally reserved for Scousers at Old Trafford. On Friday morning, Smith obliged, top-edging a Graeme Swann delivery to Jonny Bairstow at mid-wicket.

And out came David Warner to a cacophony of boos...

With a wry smile on his zinc-parched lips Warner walked to the crease as the Barmy Army were alternating between boos and 'Root' - both of which sound excruciatingly similar! As Warner trundled to the pitch, he crossed paths with Joe Root, who was trying to look as intimidating as his boyish features would allow him to. The English players would later confirm that no words were exchanged between the pair.

Warner's first task would be to face a daunting Tim Bresnan with the whole of England jeering the Aussie and cheering the Yorkshire-man. The build up was spectacular but Bresnan drifted on to Warner's pads and was tucked away for a single. Every movement, probe, prod and jog of Warner was met with equal emotion by the boisterous lot, while a flowing drive through the covers was met with stunned silence. Warner seemed to be reveling in the attention bestowed upon him, an anti-hero not seen on these shores since the likes of Shane Warne and Ricky Ponting. But just three deliveries later it would all go horribly wrong for Warner.

Reaching forward to Graeme Swann, Warner edged (a thick one I might add) the ball on to Matt Prior's pads, which then looped up into the hands of Jonathan Trott. England celebrated uproariously but Warner was shaking his head walked up to Clarke at the non-strikers end, had an animated discussion with his skipper and opted for a review - to the disbelief and chagrin of many.

The review in itself was farcical, with a naked eye adequate to see the edge. Warner walked off with a shrug and his send-off was even louder than the entrance. He took some stick for his review from both the Australian and English media but David Warner emerged and departed as the proverbial villain he was billed to be.

Going back to the dismissal it was rather obvious that Warner did not think he edged the ball. His bat hit his pad at the same time as the edge and the would-be opener clearly perceived it as bat on pad as opposed to ball on timber. Any other player and it would be termed as bad judgment as opposed to a selfish review but the partisan emotions that Warner evokes provides only one ruling.

To his credit the 26-year-old didn't show any signs of rebuke, revolt or remorse after Australia declared at 527/7. He was a livewire on the field and almost accounted for Alastair Cook's being run out. If only the ball had struck the stumps, Cook - who changed his angle while running - would have been well short.

David 'bumble' Lloyd summed it perfectly on commentary when he said that Warner was cricket's equivalent of Mario Balotelli. During the 2011-12 English Premier League season, Balotelli - at football's Old Trafford - scored and removed his shirt revealing the text, 'Why Always Me?' Much like Warner, Balotelli is known for on-field antics as much as he is for prowess on the pitch. Maybe Warner could borrow his T-shirt sometime.

Warner is not in unchartered territory however. Shane Warne and Ricky Ponting were pantomime villains on previous Ashes tours and Kevin Pietersen was not exactly the darling of South African crowds on his first visit back to the nation of his berth. Warner played Act One to perfection, now it's time to translate abuse into runs, rationale and retribution.

Comments
Topics mentioned in this article
Cricket Joe Root The Ashes 2013 James Anderson David Warner Tim Bresnan Shane Warne Michael Clarke Ricky Ponting Sreesanth Kevin Pietersen England Cricket Team
Get the latest updates on SA vs IND 2021-22, check out the Schedule and Live Score . Like us on Facebook or follow us on Twitter for more sports updates. You can also download the NDTV Cricket app for Android or iOS.