England skipper Alastair Cook along will Stuart Broad, Ian Bell, James Anderson and Graeme Swann have been rested for the lone one-day international against Ireland and the five-match one-day series with Australia that follows. Eoin Morgan will lead the side in Cook's absence. 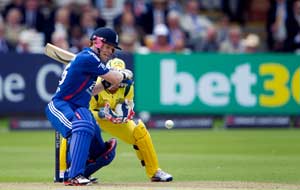 England have rested several of their Ashes-winning Test side, including captain Alastair Cook, from a squad announced on Tuesday for their upcoming one-day internationals against Ireland and Australia.

As well as Cook, England have left out Stuart Broad, Ian Bell, James Anderson and Graeme Swann from their party for the lone one-day international against Ireland and the five-match one-day series with Australia that follows.

However, star batsman Kevin Pietersen has been included in the squad for the Australia series, with fellow Ashes-winning batsmen Joe Root and Jonathan Trott also set to face England's arch-rivals in the one-day format after they too were excused the trip to Dublin.

Former Ireland international Eoin Morgan will captain the side in the absence of Cook and Broad, with the squad including five uncapped players in pacemen Chris Jordan and Jamie Overton as well as Morgan's fellow ex-Ireland star Boyd Rankin.

With Australia's 18-man squad containing just seven players who took part in the Ashes, it is clear both countries are looking ahead to the return Ashes series in Australia starting in November.

England begin their tour with a three-day match against Western Australia starting on October 31, meaning leading players will have little time for a break after a packed home schedule followed back-to-back tours of India and New Zealand.

"Following a very intense period of cricket this summer we have decided to rest a number of senior players which will allow them to recover from a heavy workload over the last three months and to prepare for the tour of Australia which begins in eight weeks," said England national selector Geoff Miller in an England and Wales Cricket Board statement issued Tuesday.

"This creates an excellent opportunity for players who have impressed in county cricket and for England Lions recently to test themselves at international level as we continue to build a squad ahead of the ICC Cricket World Cup which is less than 18 months away," former England off-spinner Miller added.

"There are a number of very experienced one day players in the squad alongside players who are new to international cricket and we are expecting a very tough challenge both from a strong Ireland side and then from Australia in what will no doubt be a very competitive NatWest series."

Cook, Anderson, Bell, Broad and Swann were all involved -- Pietersen was injured in the early part of the English season -- as England won a home Test series against New Zealand, reached the final of the Champions Trophy and retained the Ashes with a 3-0 win over Australia in a five-match series concluded with a dramatic draw at The Oval on Sunday.

This latest squad announcement means Cook -- who does not play Twenty20 international cricket -- has been rested from a squad for the first time since he took over the Test captaincy a year ago.

England and Australia will next meet in a separate two-match Twenty20 series, where the hosts will be captained by Broad and Australia by George Bailey rather than Test skipper Michael Clarke, in fixtures at Southampton and Durham on Thursday and Saturday respectively.