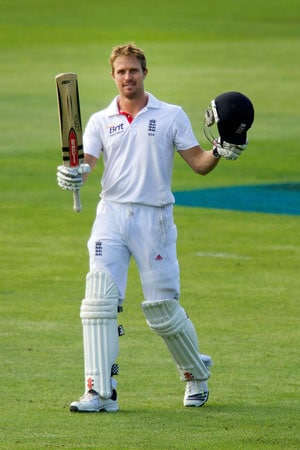 But the Somerset batsman was dropped from England's squad, and so won't feature in the first Test against Australia starting on Thursday, after struggling in the return home series against New Zealand where he managed just 39 runs in four innings.

Instead England have promoted Joe Root to partner captain Alastair Cook in what will be the Yorkshireman's first Test as an opener.

Clarke saw Compton at close quarters in both of Australia's warm-up matches, the batsman making fifties for Somerset and as a 'guest' for Worcestershire.

"We haven't bowled to Joe yet but we didn't manage to get Nick out that easily, so I'm happy he's not playing to be honest," Clarke told reporters at Trent Bridge on Wednesday.

"Nick has showed in the last couple of four day matches he has a very good defence and I'm surprised he's not in the team for the first Test," star batsman Clarke added.

Comments
Topics mentioned in this article
Cricket The Ashes 2013 Australia Cricket Team Glenn McGrath Michael Clarke Shane Watson Kevin Pietersen Sreesanth Nick Compton Joe Root Alastair Cook John Michael Arthur
Get the latest updates on India vs Australia Series, check out the India vs Australia Schedule for 2020-21 and Ind vs Aus live score . Like us on Facebook or follow us on Twitter for more sports updates. You can also download the NDTV Cricket app for Android or iOS.