Yuki Bhambri had won Traralgon Challenger event this season and will make his Grand Slam debut next year at the Australian Open men's doubles event. 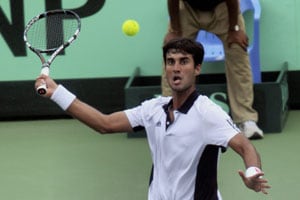 India's highest-ranked player Somdev Devvarman (90) had made it to the main draw after Estonia's Jurgen Zopp pulled out with a back injury.

There more Indian players have been given wild cards to compete in the doubles event. The team of Sriram Balaji and Ramkumar Ramanathan along with the pair of Saketh Myneni and Russia's Karen Khachanov have been awarded doubles wild cards.

Great Britain's Kyle Edmund, a World No. 377, has also been awarded a singles wild card.

Yuki had won Traralgon Challenger event this season and will make his Grand Slam debut next year at the Australian Open men's doubles event, having won a wild card with New Zealand's Michael Venus at the play-off tournament in Shenzhen, China.

Left-handed Jeevan had had a good 2013 season, with 50 singles matches victories on the ITF circuit.

"We are glad to award wild card entries to some very promising and exciting singles and doubles talent. Players such as Yuki, Jeevan, Sriram, Ramkumar and Saketh continue to show a lot of potential and represent the future of Indian tennis. Karen Khachanov and Kyle Edmund have also been performing very well indeed. We are hopeful the players will do very well in the Chennai Open 2014," Karti P Chidambaram, chairman of tournament organising committee, said.

Comments
Topics mentioned in this article
Tennis Somdev Devvarman Vijay Amritraj Yuki Bhambri Vishnu Vardhan Rafael Nadal Jeevan Nedunchezhiyan Divij Sharan Xavier Malisse
Get the latest updates on IPL 2020, check out the IPL Schedule for 2020 and Indian Premier League (IPL) Cricket live score . Like us on Facebook or follow us on Twitter for more sports updates. You can also download the NDTV Cricket app for Android or iOS.