Simona Halep still has a chance of qualifying having overcome US Open champion Bianca Andreescu in a three-set thriller in her opener. 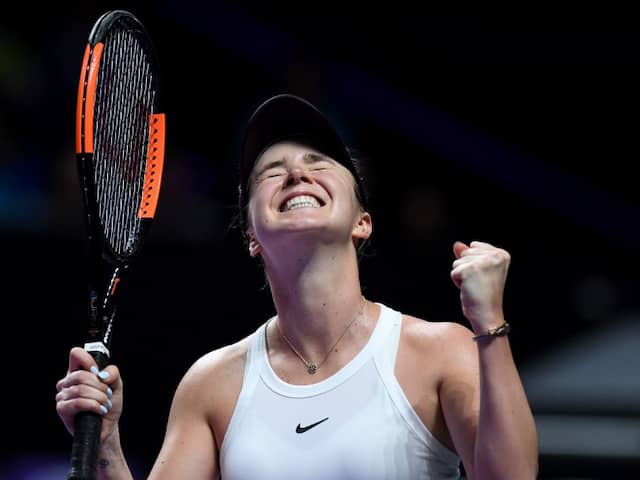 Elina Svitolina is the first player through to the semi-finals.© AFP

Defending champion Elina Svitolina stormed into the penultimate stage of the season-ending WTA Finals Wednesday after a commanding straight-sets victory over Simona Halep on Wednesday. The world number eight took advantage of an error-strewn Halep and prevailed 7-5, 6-3 in one hour and 39 minutes at the Shenzhen Bay Sports Centre. Svitolina is the first player through to the semi-finals, having also beaten world No.2 Karolina Pliskova in straight sets on Monday. Halep still has a chance of qualifying having overcome US Open champion Bianca Andreescu in a three-set thriller in her opener.

Svitolina had the better of long baseline rallies against an uncharacteristically errant Halep, who finished with 38 unforced errors.

"It was an extremely physical match," Svitolina said after the match. "I played very solid. I'm very happy about that."

After a slow start, Halep came back into the contest and a powerful forehand winner down the line clinched her break in the fifth game before the players held serve.

Like how she started, a sloppy Halep misfired in the 12th game as she handed Svitolina the first set with a slew of unforced errors.

Halep started well in the second set with an early break before falling away against a more consistent Svitolina.

The result broke a deadlock between the pair with Svitolina now holding a 5-4 edge and exacting revenge for a semi-loss to Halep at Wimbledon in July.

The 25-year-old is hoping to end a barren season on a high having not captured a title since last year's WTA Finals triumph.

In the later Purple Group match, Pliskova plays Andreescu with both players desperate to notch their first victory of the round-robin tournament.

Comments
Topics mentioned in this article
Elina Svitolina Simona Halep Tennis
Get the latest Cricket news, check out the India cricket schedule, Cricket live score . Like us on Facebook or follow us on Twitter for more sports updates. You can also download the NDTV Cricket app for Android or iOS.