Tunisian tennis star Malek Jaziri, who is competing at Wimbledon, said it was hard to think about tennis after Friday's gun massacre on a Tunisian beach, in which 38 mostly British holidaymakers were slain. 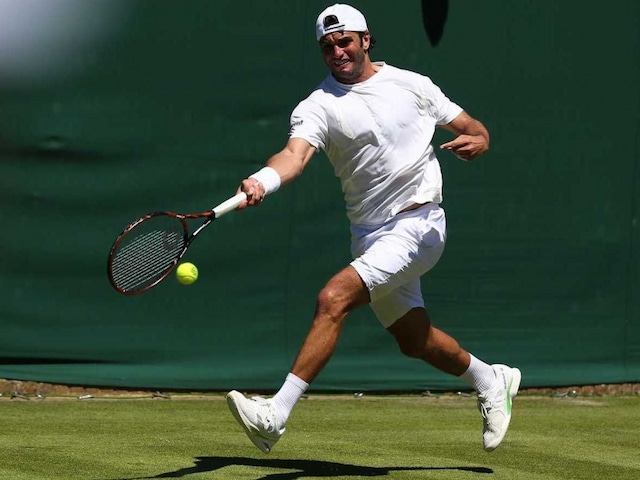 Tunisian tennis star Malek Jaziri said Tuesday extremists were trying to kill the country's democracy and economy and urged tourists to stand with his homeland in facing down terrorism. (Nadal Basks in the Sun as Temperature Reaches Record High)

The 31-year-old, who is competing at Wimbledon, said it was hard to think about tennis after Friday's gun massacre on a Tunisian beach, in which 38 mostly British holidaymakers were slain. (Wimbledon Heat on Djokovic, Serena)

"Tunisia is against terrorism. All the population knows that. We try to fight against all that. It can happen everywhere, like it's happened before here in London or in Paris," he told reporters.

"It's not easy when things like that happen in your country. You feel bad and you feel sorry for those people who were there and were killed. (Charleston Massacre 'Unspeakably Sad: Serena)

"You think straight away for your family, your friends -- for everyone, for human beings."

Jaziri, Africa's second-best player at 84 in the world, said the gun rampage at Port El Kantaoui was also an attack on ordinary Tunisians because it targeted the country's nascent democracy and has damaged the vital tourism industry on which so many workers rely.

It was the second attack on tourists in Tunisia claimed by the Islamic State jihadist group in just three months.

"These kind of people are against democracy," Jaziri said.

"Tunisia has been a democracy now for four or five years and they don't want that our democracy goes well and that we show a good image of Tunisia all around the world. They want to kill our economy by that.

"It's really the moment that Tunisia needs all the people around. Our economy is based on tourism.

"I hope that people understand what's happening and the tourists come back."

Jaziri called for tougher measures to combat the spread of the extremists' narrative.

"It happens when more people are poor. I don't know how they do it but they infect them," he said.

"We have to condemn all these things and to be more strict.

"It is not easy because we have a border with Libya but hopefully we protect more our borders.

"The most important thing is we need help in order to protect, to give confidence to Tunisian people. We are all the same and we are against terrorism."

Jaziri, who has represented Tunisia in the Davis Cup for 15 years, said his country's Muslim, Jewish and Christian communities co-existed peacefully.

"All our religions live together and we never had problems before," said the Tunis-based player.

"Tunisia is a beautiful country. We have 3,000 years of history, it's all together and we don't want that shit happening in our country.

"Hopefully in the future it will be better."

Meanwhile, Britain's 2013 Wimbledon champion Andy Murray called the attack "horrific" after hearing the stories of those caught up in the shooting.

"What happened over there was absolutely tragic. It was shocking," he said.

"Because I drive in each day, I've listened to a lot of phone?ins and stuff on the radio, people that have been affected by it. It's absolutely horrific."

But he will compete again in the men's doubles later in the tournament.

Comments
Topics mentioned in this article
Malek Jaziri Tennis
Get the latest Cricket news, check out the India cricket schedule, Cricket live score . Like us on Facebook or follow us on Twitter for more sports updates. You can also download the NDTV Cricket app for Android or iOS.