Murray received the trophy from tennis legend Martina Navratilova at his training base in Miami. 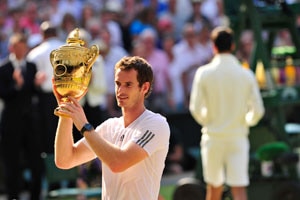 Andy Murray, the first British man in 77 years to win Wimbledon, claimed the BBC Sports Personality of the Year award on Sunday and then apologised if he sounded bored.

Murray, 26, had defeated Novak Djokovic in straight sets in July's Wimbledon championship match for his second career Grand Slam title. The Scot had won the US Open in 2012 as well as the Olympic title.

Murray received the trophy from tennis legend Martina Navratilova at his training base in Miami.

"No matter how excited I try to sound my voice always sounds boring -- that's just my voice, I'm sorry! I'm very excited right now! Thank you very much everyone," said an emotional Murray.

"Thanks to Martina Navratilova for giving this to me. She's possibly the greatest tennis player of all time.

"And finally I'd like to thank all the public who voted, for giving me so much support over the last couple of years. It has made a huge difference. I know sometimes I'm not the easiest person to support but I've had a lot of pressure on me for a long time. I'm glad I managed to do it."

The British and Irish Lions carried off the Team of the Year award while Warren Gatland was crowned Coach of the Year.

Gatland guided the Lions to their record-breaking 41-16 win in the third and final Test in Sydney.

To mark the programme's 60th year, Bobby Charlton presented a special Diamond Achievement award to Alex Ferguson, who called time on his 26 years as Manchester United manager this year.