Rufus the Hawk faces double the work to keep the pigeons down the pecking order when the new roof on Wimbledon's Court One comes into action next year. 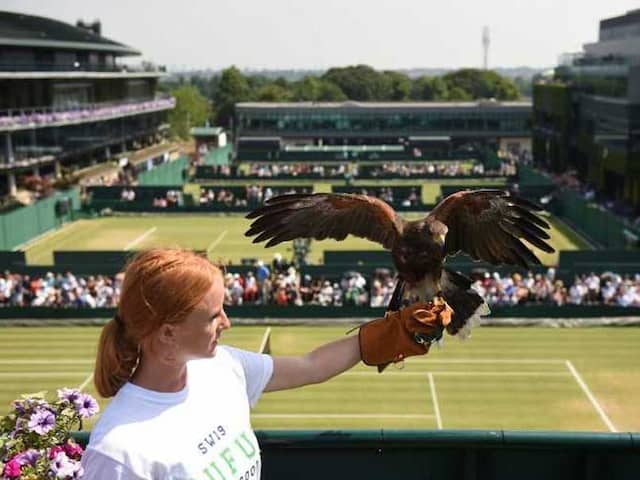 Rufus the Hawk faces double the work to keep the pigeons down the pecking order when the new roof on Wimbledon's Court One comes into action next year. So his handler is bringing in a sidekick enforcer to help Rufus take care of business on the second big stadium while he struts his stuff round Centre Court. Rufus has been making pigeons' lives a misery for more than a decade at the All England Club in southwest London. But a trusty young lieutenant, Pollux, is off the leash and being groomed to help ruffle a few feathers round the the 11,000-seater Court One.

"Rufus has not been used to having that enclosed area," his handler Imogen Davies said of the new roof.

"It's practically double the work. When the full roof goes on next year, we'll probably be implementing double action: two hawks.

"He has colleagues. But Rufus is the main one for Wimbledon and we're potentially bringing in a younger one to help take care of Court One next year."

Pollux has been his apprentice since 2016 and has been joining Rufus on his daily patrols.

Rufus works between 5:00am and 9:00am, in the cooler parts of the day before the club opens to the public.

- Scaring off the birds -

He has no problems getting into the grounds: even though he could simply fly over the gates, he has his own security photocard pass, with the job title of "bird scarer".

Rufus has been doing such a good job clearing the 15,000-seater Centre Court this year that he has been flying off to the neighbouring golf course to pester pigeons over there.

"This morning in Centre Court I was playing hide and seek with him because he was in a really playful mood," Davies said Friday.

Besides the All England Club, Rufus has also been known to do a job at London's Westminster Abbey, Fulham Football Club and Northampton Saints rugby club.

A Harris hawk with a one-metre wingspan, Rufus is 11 and has been coming to Wimbledon since he was 16 weeks old.

During the tennis championships, he flies daily but for the other 50 weeks of the year, he pops in once a week to keep a beady eye on things.

"He's got a lovely life. He flies around, does whatever he likes, he's left to his own devices, comes back to me for a high protein meal of quail and chicken then has a nice relaxing bath in the afternoon if it's really hot," said Davies.

"I love him a great deal. Whether that's reciprocal, I'm not so sure!"