The world number two from Belarussia admits to having become over-tired near the end of the season, and once the intelligent and strongly-focussed Jankovic had tenaciously clung to her break to take the first set she began to make steady progress. 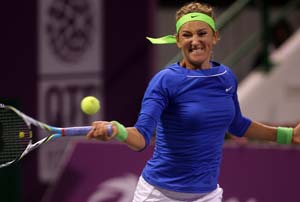 Victoria Azarenka's chances of making a challenge for Serena Williams' title at the WTA Championships took a significant blow when she was beaten 6-4, 6-3 by Jelena Jankovic in Istanbul on Wednesday.

Azarenka was once again unusually error-prone, as she had been while struggling past Sara Errani of Italy on Tuesday, and after dropping serve to 2-4 down in the first set, appeared to struggle with lack of confidence.

The world number two from Belarussia admits to having become over-tired near the end of the season, and once the intelligent and strongly-focussed Jankovic had tenaciously clung to her break to take the first set she began to make steady progress.

It was a tremendous result for the Serbian, who has only just climbed back into the top eight after two years following injury problems, and had not beaten seventh-seed Azarenka for four years.

"What's happened has definitely made me understand how to schedule things better," formner world number one Azarenka had said before the match. "It's another learning experience for me."

This loss added to the learning experience, for as Azarenka's uncertainty grew on a slowish surface she admits to not liking, she tried to push forward more and found she could not force enough attacks through.

Jankovic's steadiness helped her make a good start, and the extra enterprise she has added to her game since suffering injury problems helped her capitalise.

The Serbian broke serve in the third game, lost the advantage, but broke again immediately, and then became impossible to shake off.

Azarenka tried to do that by forcing the issue much more, advancing to launch some imperious drive volleys, but Jankovic hung on bravely, and whenever possible tried to press to deny her more powerful opponent an attacking momentum.

The most important moments came in the eighth game which lasted ten minutes and in which Jankovic tenaciously saved two break back points.

After that Azarenka looked discouraged, soon serving a double fault to go two set points down at 15-40, and though she saved those well and held on, she was unable to trouble Jankovic as she closed out the set with a solid service game.

Azarenka was soon in trouble in the second set. She was soon a break down at 1-3, and was constantly in trouble on her serve, saving fully a dozen break points, her body language often betraying her frustration.

Jankovic's standard predictably went up. To her consistency and strategically sound attacking she added one brilliant lob to frustrate an Azarenka approach and one or two rapier passes as well.

At the end he smile indicated the degree of her triumph after a dark phase of her career when retirement was not out of the question.

Azarenka, who now has one win and one loss, now probably needs to win a repeat of the Australian Open final against Li Na if she is to have a good chance of qualifying for the semi-finals.

Earlier Li Na made an encouraging start to her bid to reach the semis for the first time, when she contained a courageous second set fight-back by Sara Errani, the sixth-seeded Italian, to win 6-3, 7-6 (7/5).

The former French Open champion attacked with flair and ambition with her flat hitting and dominated many periods of the match, though she needed to fight and focus harder to regain control after her level dropped early in the second set.

"I just enjoy this moment," Li said, looking very much as though she was doing that. "I don't know if, how you say, if I can stay same level until end of the next year - or maybe I'm going to retire," she said, parodying a question which has often been put to her.

On Thursday she plays Jankovic, in a match which could see either of them clinch a place in the last four.