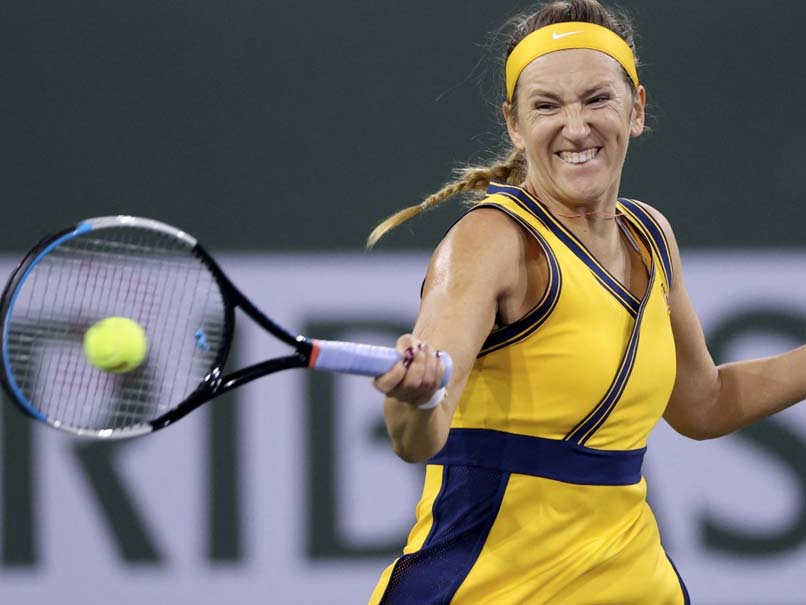 Victoria Azarenka will take on Paula Badosa in the Indian Wells final.© AFP

Victoria Azarenka, who is hoping to become the first three-time WTA winner in Indian Wells, punched her ticket to Sunday's final by rallying to beat former French Open champion Jelena Ostapenko 3-6, 6-3, 7-5 on Friday. Two-time Australian Open winner Azarenka continued her solid play in the California desert as she goes for her first title of 2021 and 22nd of her career. The 32-year-old arrived in the semi-finals without dropping a set and after losing the first one to Ostapenko on Friday night she settled in and found her form. Azarenka will face Spaniard Paula Badosa, who defeated Ons Jabeur in straight sets 6-3, 6-3.

Azarenka is seeking to win the tournament for the third time after victories in 2012 and 2016.

She is the only former champion left in either the women's or men's field, and with another victory can separate herself from the list of women who have won the trophy twice -- which includes Martina Navratilova, Serena Williams and Maria Sharapova.

Azarenka clinched victory on her first match point when Ostapenko slammed a forehand into the net.

This was the second career meeting between the two but the first on hardcourt, so it took Azarenka time to feel her opponent out and figure out her weaknesses.

"She was playing really incredible in the first set, not giving me much," said Azarenka.

Ostapenko controlled most of the first set, breaking Azarenka in the second game to go up 2-0. She then held serve to jump out to a 3-0 lead using her powerful ground strokes to move the Belarusian around the court.

Azarenka went down again 2-0 in the second set but then caught fire while holding serve in the third game.

That started a run of five straight games to take a 5-2 lead. Ostapenko held serve once more but Azarenka served out the set to level the match.

Azarenka raised her level another notch in a hard-fought third set, winning the final three games to get to the final where she will face Badosa for the first time.

Meanwhile, Badosa has reached the final in her first appearance in Indian Wells, cooling off Jabeur, who has been one of the hottest players on the Tour with 48 wins in 2021.

"I think I am playing in the final but don't know if I am dreaming," said Badosa.

"I worked very hard. I passed through some tough things in my life like depression when I was very young.

"I knew I had to be there on every point. I took the opportunities she didn't take. I played better on the big points and that is why I won."

Badosa is seeking her second career title, having won earlier this year in Belgrade where she collected her first.

Jabeur, the 12th seed, also claimed her first career title this year, winning in Birmingham to become the first Arab woman to win a WTA tournament.

Jabeur refused to go quietly in the second set, fighting off five match points before Badosa clinched it on the sixth match point when the Tunisian hit a backhand wide.

Comments
Topics mentioned in this article
Tennis Victoria Azarenka
Get the latest updates on ICC T20 Worldcup 2022 and CWG 2022 check out the Schedule, Live Score and Medals Tally. Like us on Facebook or follow us on Twitter for more sports updates. You can also download the NDTV Cricket app for Android or iOS.