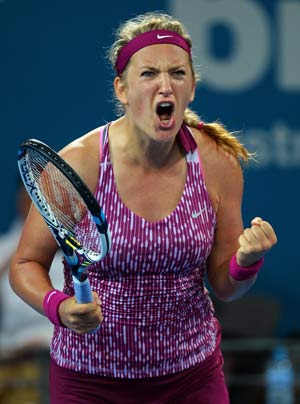 Victoria Azarenka overcame a shaky serve and another case of the nerves to move into the Brisbane International final with a 1-6, 6-3, 6-4 win over former No. 1-ranked Jelena Jankovic on Friday.

The Australian Open champion dropped her first three service games and was facing three break points in the opening game of the second set when she shifted the momentum with a winner she picked up on a half-volley when Jankovic was in control of the point.

After holding for the first time, the second-seeded Azarenka settled down and as Jankovic started to wilt in the heat. After needing 10 match points to beat Stefanie Voegele in the quarterfinals the previous night, Azarenka missed one chance to serve it out at 5-2 in the deciding set, conceding a break with a double-fault.

She then missed a match point at 5-4 but held her nerve and finally finished it off on her second match point.

Next up for Azarenka is either top-ranked Serena Williams or third-seeded Maria Sharapova - who were meeting in a semifinal match later Friday. The prospect of a match against another top four player so close to the Australian Open doesn't daunt Azarenka. (Update: Serena beats Sharapova)

Williams, the defending Brisbane champion, has a 14-2 winning record against Sharapova, including the last 13 matches dating back to 2005.

While Serena Williams has been close to career-best form, winning 78 of her 82 matches and collecting 11 titles in 2013, her older sister Venus has been struggling with injuries and is playing her first tournament since September.

Venus Williams advanced to the ASB Classic final in Auckland, New Zealand, on a walkover when Jamie Hampton withdrew with a right hip injury.

On the men's side in Brisbane, top-seeded Roger Federer coasted to a 6-1, 6-1 win over Marinko Matosevic of Australia and moved into a semifinal against No. 8 Jeremy Chardy of France.

Second-seeded Kei Nishikori of Japan reached the semifinals with a 6-4, 5-7, 6-2 win over Marin Cilic of Croatia and will next play former No. 1-ranked Lleyton Hewitt, who cruised past Romanian qualifier Marius Copil 6-4, 6-2.

In Perth, the French team clinched a place in the Hopman Cup final against Poland with a victory over winless Spain.

Comments
Topics mentioned in this article
Tennis Maria Sharapova Kim Clijsters Jelena Jankovic Victoria Azarenka Andy Murray
Get the latest updates on IPL 2020, check out the IPL Schedule for 2020 and Indian Premier League (IPL) Cricket live score . Like us on Facebook or follow us on Twitter for more sports updates. You can also download the NDTV Cricket app for Android or iOS.