Venus said that she needs time to rest after playing the first tournament of 2014 in Auckland. 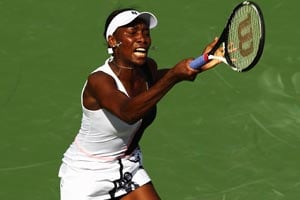 Former World No.1 Venus Williams has withdrawn from the Hobart International while Australian tennis player Samantha Stosur will make a return to the event after a successful decade.

"Venus Williams has confirmed today that she will not be making an appearance at the Hobart International. I know it was a hard decision and we wish her the best of luck for the Australian Open," tournament director Mark Handley said Sunday, reports Xinhua.

Venus said that she needs time to rest after playing the first tournament of 2014 in Auckland.

"After a long week during my first tournament of the year, my body needs time to rest and recover. Unfortunately, I am not able to play this week in Hobart. I was looking forward to playing in Tasmania and I sincerely do hope to play there in the coming years," Venus said, who was drawn to play Italian sixth seed Flavia Pennetta in the first round. Lucky loser Silvia Soler-Espinosa from Spain will replace her in the draw.

Top seed Samantha just finished an unsuccessful try with compatriot Bernard Tomic at the Hopman Cup in Perth for Australia. Her last Hobart International appearance was in 2004 when she was only 19 and on the verge of breaking into the world's top-100.

A decade later, Stosur has bagged the women's singles US Open once and other majors four times, becoming one of the most successful women players in Australian tennis.

"I'm a completely different player to what I was back then. I'd like to think I'm a lot more consistent and know what I'm doing. Ten years is a long time, especially in tennis," she said.

Samantha usually competes in Sydney in the week before the Australian Open but opted to change her schedule in 2014 to participate here.

"It is good to do something different and I knew this tournament was a nice one, so I thought why not?" she added.

Comments
Topics mentioned in this article
Tennis Elena Vesnina Yanina Wickmayer Bethanie Mattek-Sands Venus Williams
Get the latest updates on IPL 2021, IPL Points Table , IPL Schedule 2021 , live score . Like us on Facebook or follow us on Twitter for more sports updates. You can also download the NDTV Cricket app for Android or iOS.