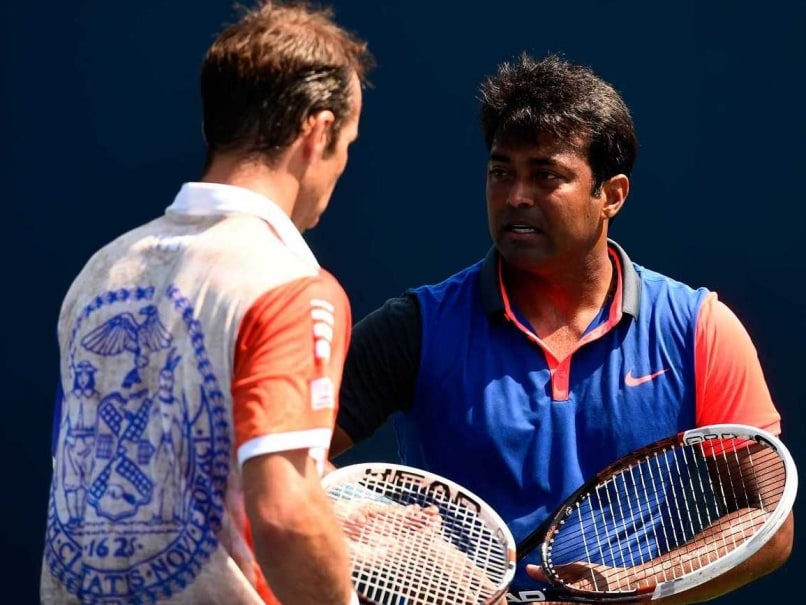 Leander Paes (R) of India and Radek Stepanek of the Czech Republic during their men's doubles match on Day Three of the 2014 US Open.© AFP
New York:

The sixth seeded pairing defeated Chinese Taipei's Yen Hsun-Lu and Czech Republic's Jiri Vesley 7-6 (3) 6-3 in a contest which lasted an hour and 23 minutes.

In the intensely contested opening set, both the teams exchanged a break of serve and were guilty of committing an equal number of unforced errors. (Read: Halep, Venus Knocked Out)

Lu and Vesley, however, gave away easy points by committing as many as four double faults, eventually falling short in the tie-breaker.

But Paes and Stepanek dominated the second set, clinching two break points and being distinctly better on their second serve.

The sixth seeds will next take on the winners of the match between 11th-seeded Spanish pair of Marcel Granollers and Marc Lopez and the Dutch team of Robin Haase and Igor Sisling.

In the junior competition, Ojasvinee Singh entered the second round of qualifiers after beating local favourite Alexandra Sanford 6-3 6-2.

Comments
Topics mentioned in this article
Leander Paes Radek Stepanek Tennis
Get the latest updates on India vs England Series, India vs England , live score and IPL 2021 Auction . Like us on Facebook or follow us on Twitter for more sports updates. You can also download the NDTV Cricket app for Android or iOS.